The out of county trip was always going to be a social, although pike were the reason we travelled to the fishery. The venue has an enviable track record of producing decent pike, therefore receives quite a bit of pressure by anglers, of varying abilities and techniques. One thing's for sure, these fish are well cute and require much more effort than chuck & chance if anyone is to experience consistent success. So, at 06.00 hrs, the two vans were parked up in the car park and four (Skunk had cadged a lift) of us got our kit assembled and headed off into the darkness in readiness for our session. Swim choice was a lottery, the whole area has produced big pike in the recent past.  Luke, Skunk, Benno & me set up stall along the bank, east to west. The dawn was still an hour away and expectations were high.

It was around 07. 55 hrs (sun rise) that Skunk registered the first bite. He was the only one of us using a float and landed a PB of 14 lbs 4 oz - he's a carp angler! Within 20 minutes he'd added a second fish, to his tally, with a nice pike of 12 lbs. What's going on? A carp maggot giving us a lesson?
The weather wasn't particularly favourable, yet we couldn't deny that the pike were catchable if we placed our baits in the right spot. Luke picked up one of his rods, expecting to re-position his bait, only to discover that a pike had taken it as he did so. Nothing big, but it was number three for the morning.

Benno & Luke took to chucking jig baits and drop-shotting, without result, before, at 10.10 hrs one of Luke's back-biters registered a take! On the rod, within seconds, it was a really finicky bite which took a good while to develop. As soon as Luke stuck I knew it was a decent lump. After a very testing battle, I was the soppy git with (Luke's) a short-handled landing net, attempting to scoop up his prize. What a fish? An absolutely pristine, wild, pike of 20 lbs 2 oz. I really don't know who was most excited? 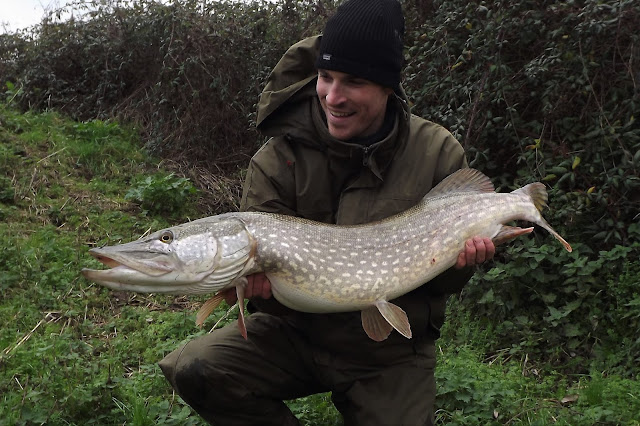 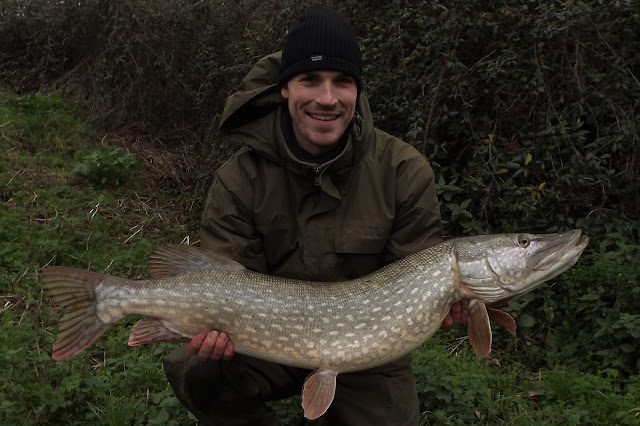 As you can see, the photos were taken and the fish released, back into its' watery domain. That was it - Benno & I didn't register a bite. We both know exactly what Skunk & Luke were doing, so no secrets there. We'd gone there hoping for a result. Luke did the deed and we have to accept that not every one can be a winner. Another day, a different dollar, my turn will surely arrive as there are no secrets, nor petty jealousy, amongst this group of friends.