No surprise that I returned to Marshside for another session, into dark, this afternoon. After yesterday's result, it was a no brainer in reality. Conditions were much brighter, although the wind was still a boisterous SW and played havoc with my light weight swingers. So much so that I switched over to Sid & Jasper, my, wind beating, carp hangers, for a spell. Mick, the bailiff, turned up before I'd even cast a bait and we had a nice chat about the perch and the forthcoming "newsletter" for which I have offered my services to assist the club secretary. It's Robbie's first effort and, as a new member, I am happy to attempt to put something back into the club that was so generous to offer me, a very sought after, membership. Mick is always good value, and cheerily said his good-byes as he continued his round of the fishery to grab day ticket money off two other guys on the opposite bank.
I got the rods out, same little and often baiting strategy as yesterday, and sat back to await events. It wasn't ten minutes before the right hand rod was in action. A cracking perch of around a pound came splashing to the net - blank avoided! Within half an hour I had a second fish, this one weighed at 1 lb 3 oz, to the same rod. I got destroyed by a carp, on the left hand set-up, and had to re-tackle after getting snagged in the reeds. It remained fairly quiet for the next hour. Odd bleeps from the alarms, but nothing to strike at until a stuttering take saw me attached to a very strange creature. Straight away I knew it wasn't a perch, but it wasn't a carp either. Bream couldn't possibly fight this hard and it didn't have the power of a tench, but it was very dogged and stubbornly came toward the waiting net. Whatever I was expecting, it wasn't this! A bloody wild Fan-tailed Goldfish-type thingy. I grabbed a photo, as it lay on the unhooking mat, just for the record. Very weird. 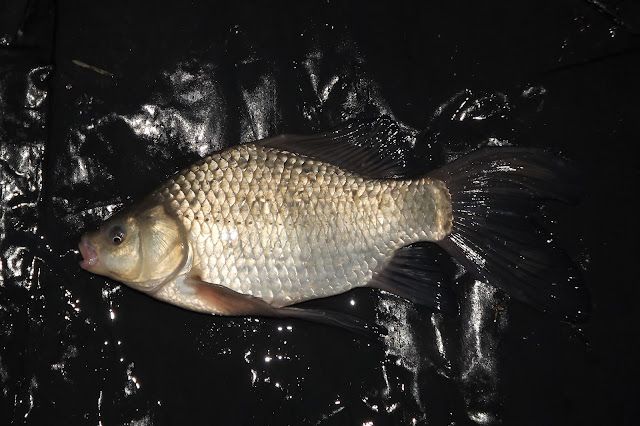 Bait back out, the sun already below the horizon, and the clock is ticking steadily towards home time. With the light fading fast, another bite on the right hand kit saw me attached to a much better perch which tipped the scales at 2 lbs 4 oz and represents my eighth, over two pounds, from the venue. It's been a superb weekend and I now have to get back into the groove with a 54 hour week, before Bev and I are off on an adventure. It will probably be in the run up to Christmas before I cast another bait. With these fish now under my belt, it will be far easier to do other stuff. Will this fishery provide me with a three? I'm happy to keep looking whilst the back up fish are of such high average weight.