The perch project is coming along rather nicely, although not every tweak has proven to be a success. Even failure, however, can have its' benefits if you're able to learn from, recognise, the mistakes? The recent run of good fortune came to an end on Monday, when I was able to get back to Marshside for an afternoon session, into dark. Conditions looked good, although much brighter than my previous visits. I had nearly four hours to play with, but failed to add to my tally, the only fish hooked coming adrift at the net! Bloody barbless hooks! Not to worry, it wasn't the "three pounder" I so desire, thus wasn't left feeling like I'd swallowed an orange when it spat the hook. Various rig adjustments and bait presentations didn't produce, on the day, but I have to remain positive that the basic methodology is sound and will produce the result I seek so long as I can stick to the task.

All that said, work remains off the scale and time is very much at a premium in the run up to the festive period. My next session will be completely different, as pike are the target species and involve a crossing of the Kent boundary into some dark, and inhospitable, terrain. Benno, Luke and myself are headed off, on an away day, to a venue with a decent track record for big pike, although we'll have to be at the top of our game, as it does see quite a bit of pressure during the season. Are we good enough? Only one way to find out; go there and see how we fare? The boys are far more adventurous with their tactics than me, and the static dead bait approach (even with all my edges). What I find most reassuring is the fact that my tactics are still capable of producing a result, despite changing very little since the mid/late 1980's. Pike really are that predictable/thick! I'm perfectly happy to watch the lads casting lures and whipping the surface to a foam, as long as it's not directly above my baits, whilst I sit back and watch the world go by. The bite alarms being my only requirement to keep me in touch with what's happening beneath the surface. All I have to do is ensure that my bait is the best that I can acquire and positioned in such a place as to be easily discovered by the pike. Location, location, location..............it's the very basis of any successful angling project. You simply can't catch what ain't there. 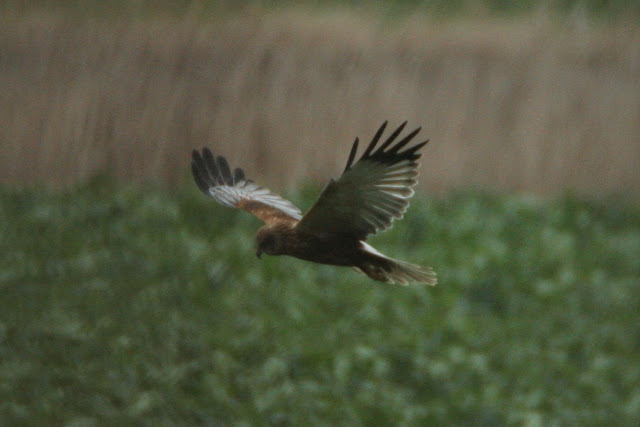 So nicely back to Monday and me sat out on the marsh awaiting audible alerts whilst watching the birds that were about their daily routine. Winter thrushes are now present in good numbers, both Fieldfare and Redwing conspicuous around the berry laden hedgerows, whilst Blackbirds are also present in higher than normal numbers, thus suggesting a continental influx?  There's a very good candidate for a juv Rough-legged Buzzard, which I've now seen on three occasions, yet still haven't managed clinching views therefore can't claim, but certainly worth further searching. The Cormorant movements, to and from the Stour Valley, continue to provide spectacle, whilst awaiting the alarms. Quite what the true numbers involved are completely beyond me, but a spectacular sight all the same. Best bits on Monday came in the form of a Little Egret which had decided to feed amongst a mixed herd of sheep and ponies, plus a stunning adult male Marsh Harrier which did a nice fly past, although always partly hidden by the fishery hedge! A Kingfisher sped past whilst Reed Buntings, Chaffinches and Linnets were flitting around the field margins and adjacent reed beds. Just to see the session to conclusion, sun-set over the western horizon was stunning. I really don't need to catch fish to enjoy a session at the waterside!