Pieces of a puzzle

The perch search continues and I have to admit that I'm really enjoying this voyage of discovery that is unfolding as my quest evolves. Time wasted at Black Dyke is but a memory, a glitch, in a very steep learning curve. I will be the first one to hold my hands up, I know very little about the finer aspects of catching "big" perch and, therefore, am having to adapt my tactics as I go. Today was a prime example of what I mean. Time off for good behaviour, plus Bev had to visit her parents, so I managed another session at the club fishery over at Marshside.
With nine two's already landed, I felt sure that my tactics were pretty much as good as I could manage. The first two bites resulted in lost fish, one a good lump, and meant it was time to have a rethink. My bait choice isn't up for discussion, but my hook pattern certainly is. I also had a tinker with my hook link, reducing it from 20 to about 8 inches and what would you know. All the subsequent bites were converted into fish in the net. I even netted my tenth two, of the campaign, and feel sure that things are moving in the right direction. 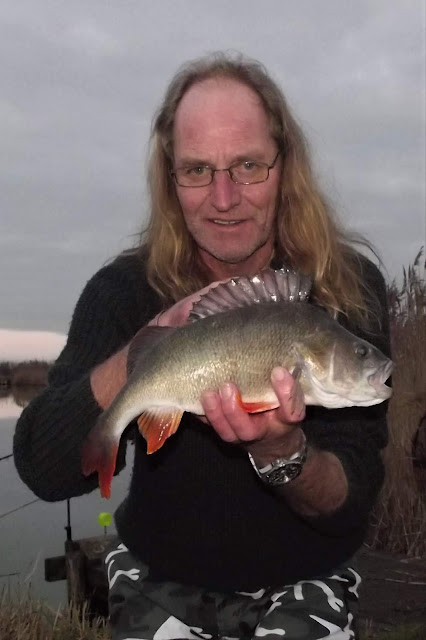 I had a conversation with another club member, who told me that his best perch from the venue weighed 3 lbs 10 oz. Bloody great news, then he spoiled it by telling me that he'd taken it on sweetcorn whilst reeling in, the fish, therefore, a freak capture and nothing to shout about, in my opinion. The only positive from the exchange being that I'm at a venue which contains perch of a size that I seek. I have ten more weeks in which to complete this challenge before I set my stall out for a new project. It won't matter if I fail to catch a three, as there's always next year? What's most important is the fact that I continue to learn as a result of my experiences on the bank and continually tweak my tactics to adapt to the conundrum posed by these wonderful fish.
Posted by Dylan Wrathall at 18:13