Fishing for a photo

As part of the festive celebrations, I received a very dis-respectful gift from one of the Kefalonia gang. So hurtful, how could anyone do such a thing? (J for joke - please don't think that I'm in any way offended!) A Santa hat with "MALAKA" written on it. Now this is very much, a clique membership thing. Elaini, the owner of Saoulas, has used this (very rude) term to describe our gang since we first assembled there some four years ago. Taken out of context, I feel sure that many would be offended - I think it's brilliant and, as I'm the guy wearing it, hope no-one else has any negative views? 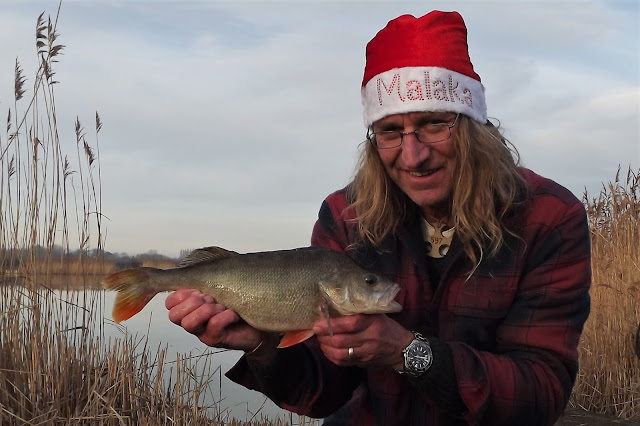 As soon as I opened this present, I knew what I wanted to do - get a photo of me, with a decent fish, whilst wearing said, offensive, headgear. That Boxing Day pike wasn't worthy, so I had a very short, afternoon session, after perch, today, and managed to winkle out a fish of 2 lbs 4 oz (and a bit!) which did the job. I had three perch in little under three hours, and couldn't believe how quickly the temperatures dropped once the sun had set. I packed up at 16.15 hrs and my un-hooking mat was already frozen!