I hadn't got any particles prepared, so was taken by surprise when the opportunity to go fishing suddenly arose. Scratching around the bait cupboard I managed to assemble a couple of tins of sweetcorn, some flaked tuna and some krill carp crumb. It would have to do, because there was nothing else! Kit already in the van, I drove across to Marshside in brilliant sunshine, just happy to be out. I pulled up and did a lap of Homersham Lake, but wasn't overly impressed, so continued on to Scroggins where the only angler on the venue was just packing up. I'd got the place to myself, and so it remained for my entire session. Two rods out, fishing to marginal features, with a stiff ENE breeze pushing into my swim. In spite of the wonderful sunshine, sat on my chair it was rather chilly and I grabbed a couple more layers from the van to allow me to keep warm.
Nothing happened to trouble my bite alarms and, eventually, after three hours, I decided to reposition the baits into open water where a few carp had shown. I cast out the rods, hoping that a carp might stray across my single offerings. There was a bit of activity in the marginal reed beds and I threw out a couple of handfuls of dog biscuits amongst the stems to see what was causing the commotion. Almost immediately a bright orange Koi appeared and started taking the floating biscuits. Only six or seven pounds, but still better than the bottom baits had provided, so time for a change of tactics. Back down to the van I grabbed my sawn-off Mk IV and spare Mitchell 300 loaded with 12 lbs b.s. line. I tied on a size 8 Fang Twister and baited up with a scuffed up 14mm pop-up. Twice, in a few minutes, I had carp suck in the offering, yet I missed them both. I was headed for a blank. Whilst I was stood up, I saw the Koi swimming at the edge of the reeds, sucking down debris from the floating scum that the wind had pushed in. Time for a move and quickly my little offering was bobbing about amidst a raft of floating reeds and then it was gone and I bent into an incredibly powerful fish. Game on, I couldn't give it an inch and had to bully it away from the snags and play it in the open water, avoiding the two lines that were still fishing. Probably five minutes had elapsed, and it clearly wasn't that Koi, when I got my first glimpse of the fish and immediately knew it was a bit special. A couple of minutes later and into the net it went - bloody hell, it's a "twenty"!
With no-one else around, I had to set up the camera for a few self-takes and hope that I'd do the fish justice. It looked magnificent in the late evening sunshine and I felt very pleased with myself for making something happen rather than sitting behind the alarms just hoping. Job done, I happily packed up and headed home. Days like these don't happen that often and I wanted to enjoy the moment. I couldn't blog about it, however, because I'd placed all my card readers and cables in storage. Dumb schmuck! I was down Poundland, just after it opened, in order to get another SD card reader and transfer the images from my camera to the laptop. I called in a Camo's to tell him the tale and scrounge a cup of coffee, before coming back to go through the process and write this post. I think the majority of pleasure anglers would agree that it is a superb fish, especially as it's my first double from the fishery! 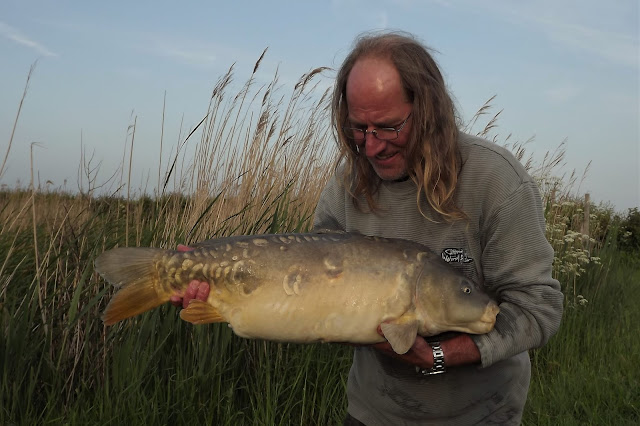 With all the upheaval of our current building project, I'm not too sure when I'll next get out but will remain content with my lot as this fish didn't figure in any of my plans for 2018. Happy days.