Newland's and the one that got away!

Apologies for the lack of recent posts - life has been very hectic just lately. Bev's 60th last Monday, so quite a bit of family socializing associated with this event. To top it off, Bev's best friend, Jayne, also celebrated her 60th during the same week and that entailed spending last weekend away, in Sheffield, to allow us to attend a "surprise" party - great stuff. I was allowed to drive Bev's CX-5, which was a joy in itself, and the party was a brilliant success. Jayne's face was a picture when she walked into the venue to be confronted by a mix of family, friends and work colleagues. I even managed a couple of year ticks as a result of the travelling. Red Kite was a given, knowing that we had to do the M25/M1 route. A quick wander around the Thorpe Hesley (Yorkshire) park was rewarded with splendid views of a pair of Nuthatch, engaged in refurbishing a nest hole. I also managed my first butterfly of the year when I discovered a Red Admiral nectaring on some Snowdrops - result! 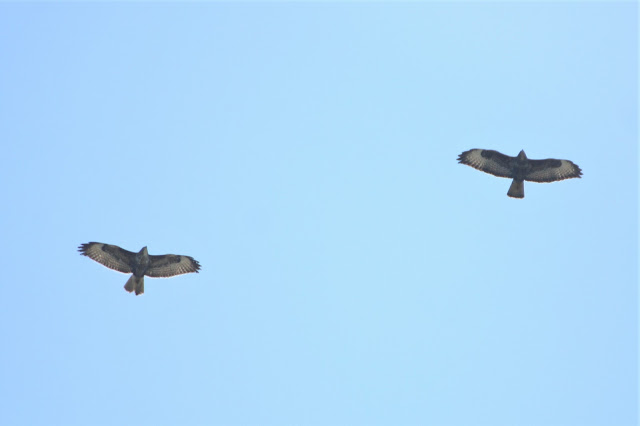 Back home late Sunday afternoon, a scan of the local weather predicted Monday to be perfect for some raptor movement. And so it proved, although I managed just five Common Buzzards from the garden, the massed spirals of gulls away to the south and west, told their own story as unseen BoP's moved through Thanet airspace. Before the sun had burnt off the cloud, I had taken a stroll around the Newland's Farm hedgerows, in the hope of an early Wheatear. Nothing doing, but my efforts were not in vain, as I recorded a Brambling and two White Wagtails for my troubles. A Chiffchaff in the garden, very briefly, and my second butterfly of 2018. A rather tatty Peacock took advantage of the Ivy around our decking, to enjoy the sunshine. Fishing is very much on the back-burner, at present, although I am hopeful of getting a session in during the Easter weekend.

So what's all the "one that got away" stuff about? As I've already said fishing is very secondary at present. It was whilst I was stood at the kitchen doorway, enjoying my first coffee of the day when I espied a distant blob atop the mature trees that surround the paddocks of the main farm complex. I was using my 8 x 42 "Elites" but the distance was 500m plus and there was no way I could make out any detail. My hunch is that it was a Hawfinch, all bulky and upright. However, it dropped down from it's prominent perch never to reappear. It would be a patch tick, a bloody mega for Thanet, yet it doesn't matter any more. How the perception of importance changes with the passing of time?