Out the bungalow at silly o'clock, headed for my final session of the, "English", pike season. I was torn between the river and the drains, eventually settling for the latter, as I am so much more familiar with them. Two baits cast out by 05.55 hrs, both Mackerel tail sections, popped-up with Fox bait poppers. I'd have preferred to use Sardines, but didn't have any left in the freezer, so used what I had.
Within 35 minutes the left-hander was away, I making a complete pig's ear of the strike and bumping the fish off the hooks as a result.

The dawn was spectacular not only because of the sun rise but, also, the huge movement of Starlings flying east, out to sea. In the first hour I estimated some 20,000 but, because I am completely out of practice at this number assessment, would be happy to concede that possibly twice as many had passed over. Birds, in these numbers, are a magnificent spectacle, no matter what species.
I had two more bites, both fish landed, before I called it a day and headed for home and a kip before another late shift. 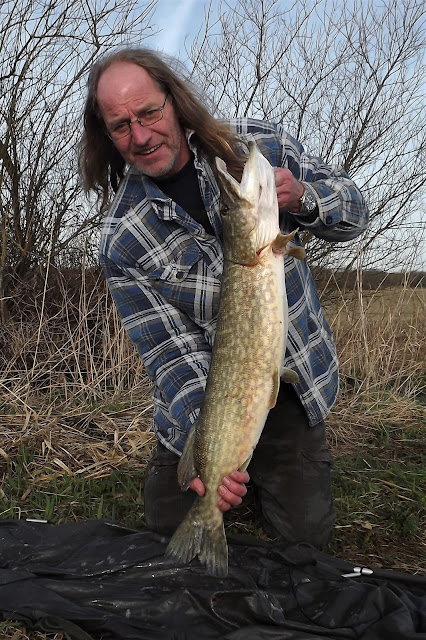 One more addition to the year list, when two Great White Egrets were spotted over on Willow Farm, at Worth.