I work with a number of carp anglers; the majority of whom do very little fishing in the UK preferring, instead, the holiday carp angling available just across The Channel. Between them they have caught an impressive amount of very large carp to well in excess of 60 lbs. Young Gaz is an analogue Assistant Supervisor, who only fishes in France. He dabbles in the delights of e-bay, but also seeks out other investment opportunities in the "for sale" columns of his local papers (He lives in Chatham/Rochester?) Carp angling has produced a never ending procession of "complete carp kit" for sale adverts - as disillusioned souls seek to recoup some of the expenditure involved in being drawn into the big fish scene without having gone through any type of apprenticeship. You can buy all the gear you could ever wish for, straight off the shelf - experience and watercraft, however, isn't something that comes pre-packaged! So Gary buys this kit at knock down cost, takes his pick of the best bits before attempting to get his money back via the e-bay route. I'd told him that I was on the look out for some "Big Pit" reels - "I might have just the thing?" being his response. So on Monday, I took delivery of a couple of Wychwood MAXimiser Big Pit 70 reels - two for £30! Seemed like a deal? 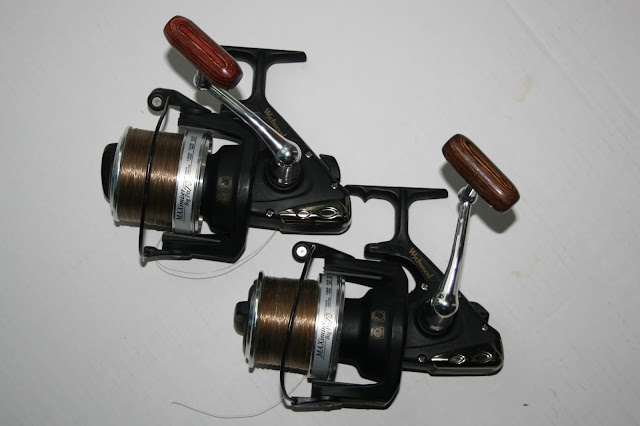 I've not fitted them to a rod, as yet, but they appear to be well built, robust - type, reels which might well suit my purpose. I've had a little play around and the line lay seems very good and the retrieve speed is much better than anything I own already. I had a quick scan of Anglers Forum to discover that the major complaint was how heavy they are? Get real - they spend 95%+ of their time cradled on rod rests, I don't care who, or how successful, you are. It's not like they're designed for use at the all action, "carp puddle", commercials or dropping baits into the margins of the RMC. No; they were built with a specific purpose in mind - getting bait and terminal tackle further than ever before. Some of the ultra-cult guys, as seen on You-tube, are casting rigs in excess of 140m! They wouldn't be doing that using a Mitchell 300! These modern reels are designed and engineered for a specialist role - it's highly successful, slick, marketing campaigns that results in these reels appearing on the banks of Long Shaw Farm and Sandwich Coarse Fishery, where they are seen as status symbols/indicators of ability! However, that's by the by, I now own two and, if things pan out as hoped, they may well be seeing some action next year. (If not, I'm reasonably confident I'll get my thirty quid back - on e-bay?)

﻿
I have a venue, in mind, where bait boats are not allowed and the controlling club has a two rod limit, although I am not entirely sure why? However, as it's their fishery - they make the rules - if I don't like it, I don't have to join. It's a very simple decision to make. A two rod limit? Whatever next? Well, if I'm completely honest, two rods, fished well, are enough for any angler; particularly one such as I who has very limited time. In my past, I had the benefit of being a time bandit - what I lacked in ability was easily disguised by the extended periods I spent at the venue. Even a complete numpty will get a result eventually? In all my time at Tring, Claydon, Stanborough and Woburn - two rods were all we expected to deploy. It had to be pike, and not carp, anglers who were the first to push this limit? Fred Wagstaff was using four rods, pike fishing in Ireland, in the 70's - I think it was Paul Elborn who was with me when we got "bailiffed", on the Fens, December 30th 1986, using six each. It was when The Great Ouse River Authority issued their own license (as did all the other river authorities) and we both had two, thus could fish four rods, in theory. Still short of the actual number we were using. This poor soul came along the bank, having spotted us from the road bridge at Three Holes, purely to remind us that our licenses ran out at mid-night on December 31st and we'd need to renew them for next year. He told us we were not allowed to fish four rods each , because that's how many he had walked past; the rest were spread out beyond our umbrellas - I asked why I was allowed to purchase two licenses? It degenerated into abuse shortly after, my parting shot being "You'd best go get a Policeman!" Nothing happened, although we did reel a few in, just in case!

So what about bait boats? Cheating or utilisation of technology? There are arguments for both sides but, in my eyes, technology wins hands down. I already rely on electronic bite indication, and have done since the early 1980's, use carbon fibre, not split cane, rods, am totally sold on the modern hook and monofilament quality - why shouldn't I use a bait boat, if the rules allow, technology has advanced all other aspects of my life, why should my angling not also benefit? I have a brain, therefore I'm not forced to use something, just because it's new. Fads and fashion play no part in my approach - yet I happily encompass advances if they suit my purpose. The vast majority of my angling is now done using braid on the reel, this modern material is nothing like the "Dacron" that was available in days gone by. Ultra thin, abrasion resistant and incredibly strong, what's not to like? I've heard/read all sorts of anti-braid rants, nothing has changed my opinion. Braid is no more likely to cause fin/scale damage than mono in the same situations, although I accept that the fine diameters might have some part to play and I've not been using this stuff for more than a couple of years, so lack experience? I think what I should also make very clear is I haven't used it for any type of distance carp fishing - and that might just be where the real issues are? If ever I do succumb to the lure of long distance carp angling; I will reappraise my stance when that time arrives.

So, at present, my plan is to continue with my exploits on the RMC and East Kent marshes. Joining clubs, with a selection of big pits and lakes, will be something which can wait until next "close season" when I will have a much clearer picture of how my life (read finances) is panning out.