I hate to admit it, but I have wasted the best part of the last fourteen months, as I've pursued the barbel of the River Stour. Fred Crouch would have wondered if anything he had ever taught had been understood?
My wake up call came on Friday, when my confidence was shattered by the missing of a savage, un-missable, bite. How could it happen? What had I done wrong?
All day, on Saturday, it played on my mind and I kept reliving the moment - a waking nightmare! Then it all clicked into place! What a complete cock I'd been. My angling has not been about catching barbel but, instead, avoiding eels. The rig, and the size of my bait, was designed to deter the unwanted attention of these good for nothing, slimy pests and my effort and thought processes have been geared up like this since June 2013. It wasn't a "eureka!" moment, more like a cold shower when you need to remain awake. The shock was pretty much the same - how could I have forgotten so much of what Fred had instilled into me during those magical sessions on The Royalty and King's Weir. Yes, it is true that many aspects of barbel angling have changed in the intervening years, but it remains a basic fact that barbel are the same species as they've always been and will behave in similar manner as they've always done. I needed to get back to the basics; those which Fred had so generously taught me over thirty years ago.
Back then, maggots were "the bait" - we introduced them into our swims in huge quantities. To use six - eight pints during a session was a regular occurrence. To get them to where we wanted, we used swim feeders as part of our terminal tackle yet, the bulk of the bait was introduced to a specified area by the use of a bait-dropper (plastic and rather prone to breaking as I seem to recall). The whole purpose of this approach was to produce a diamond-shaped bed of feed, which trailed off downstream, that the fish would follow to the hookbait. Accuracy was the key, if this was to be done to maximum effect, the fish were cautious, when they first come into contact with the freebies, but gained in confidence as they moved up into the diamond before they became totally preoccupied and a baited hook was not an issue. What also helped was the fact that, at that time, both The Hampshire Avon and The Lea held massive populations of barbel and feeding competition between individual fish also aided our cause. In those days we were about catching barbel, any barbel, multiple captures were normal and size wasn't a consideration - a four/five pound barbel in King's Weir would try to pull you out of the punt (anchored to the chain that ran across the head of the pool) - happy days!

How does this fit in with the situation on the R. Stour? This is a river with a very small population of barbel, as far as we know, therefore it is unlikely that the tactics of the 1980's would prove to be of much worth; however, the basic thought process about baiting strategy and fish confidence will still hold true? All day on Saturday, and for most of Sunday, I was thinking through my plan. Maggots were replaced with a particle mix (I'm not about to tell you what - but you can find it in a pet shop if you look) which I spiced up with the addition of some flavour. I also liquidised a small amount of the mix, so as to give off a flavour trail when it was introduced to the swim. The amount I introduce is directly proportional to the number of fish I'm expecting to be present which, until I know different, means that I'm introducing around half a kilo per session. (That's still an awful lot of individual particles)


I had already decided on the swim where I would put these ideas into practice, it being an area where all the ingredients, which I understand to be barbel features, were present - although I'd not fished there before and had never seen a barbel anywhere in the vicinity.  Well; the rest, as they say, "is history!"  Only time will tell if this capture was a fluke or good angling? 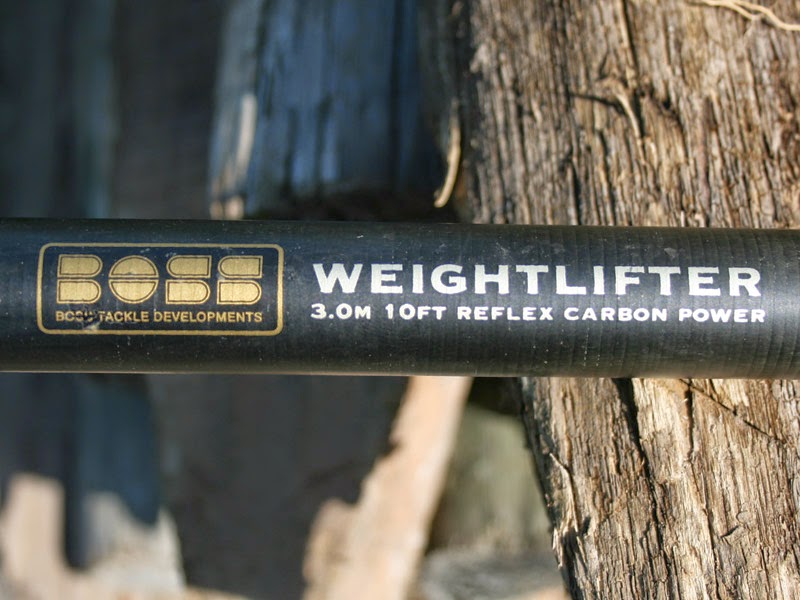 As I spend an awful lot of my time fishing alone, work commitments not lack of mates, it is essential that my gear is user friendly. To this end, my landing net pole is a 3m carbon fibre Boss Weightlifter and my landing net a large mesh 24" pan net fitted to a "Barbus" oval frame. This combination ensures that I'm not leaning over, or uncomfortable, when attempting to get a fish ready for landing.
Two other items which are proving to be invaluable are a small unhooking mat (it rolls up inside my ruck-sac) and my chest waders. The waders not only assist in getting the fish back into the water and fully recovered, but also provide a physical barrier to the bloody mosquitoes which are such a problem along the river! - Tight Lines