An evening session on the R. Stour coincided with an electrical storm and accompanying rainfall. Benno and Luke (who'd been fishing all day) packed it in, leaving me to brave the elements on my own.
The chosen swim was one where I'd seen barbel in the previous weeks, but had been unable to do anything about it due to work/time restraints. I got set up in heavy rain; I had an umbrella with me for the first time since Feb 2012! I went through the usual routine of laying down a carpet of 4,6 & 8mm pellets, using pva bags and a bait dropper. My confidence being 100% with this approach. A Wood Mouse kept me company, for a while, as it devoured a few spilled pellets - this photo is with my 18-55mm lens; so it was very close! 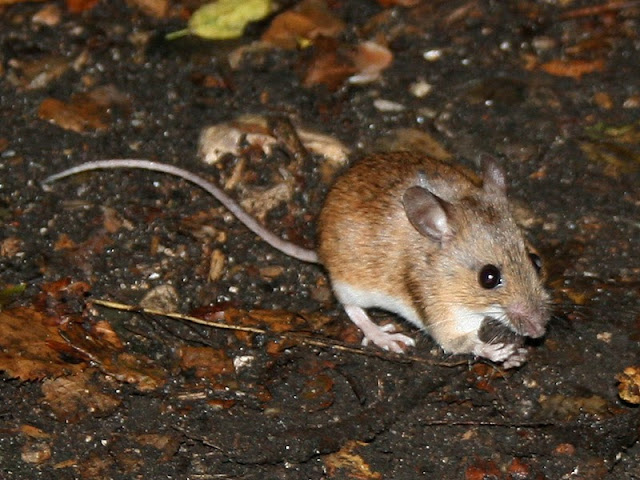 Eels were, once again, a major headache - rod wrenching pulls on the 18mm hookbait resulting in nothing. Every now and again, one would hang on long enough to give a few tell tale thumps on the rod before letting go of the pellet. I had used up most of my pva bags and was in the early stages of packing up when the alarm sounded (again) and I hit a fish which wasn't particularly amused. At long last, my first R. Stour barbel - on one of my 1.75lbs t.c, 12ft "Specialist Barbel" rods fitted with a Cardinal 66x reel - the same kit as I'd used in the R. Severn. I was a fantastic experience, quickly shared with Benno as soon as I had it safely in the folds of my landing net.

At 7lbs 14oz, it isn't a monster, but it is a fish that should aid my confidence and help in my quest for a PB from this water. Being on my own, the photos were never destined to be much better than record shots; the usual routine of a fish laid on my sling with a rod & reel for comparison.
Posted by Dylan Wrathall at 01:09