This one's for you Val

Valerie and Deb were two other guests, staying at the Irene apartment complex in Agios Gordios. Just like Bev, they were on holiday to do little more than chillax and get a tan. The Irene pool was, therefore, the hub of all things associated with this chosen pursuit. That these two, lovely, ladies were fully paid up members of the "happy-clappy" branch of the God Squad was a nice way to establish some mutual understanding. I still, proudly, wear Mum's St. Augustine's cross, around my neck, despite my own beliefs about that fairytale contained within the Bible. It was my explanation of the number 597, which is etched on my cross, which set us chatting about many things over the course of the holiday. It turned out that Val had an allergy to wasp stings. Basically if she got stung by a wasp, she could die if medical assistance wasn't rapidly forthcoming. In her bag was a syringe containing the medication required to combat the effects but, it wasn't a cure just a way of allowing some time to get assistance.

Given that this was the situation some might question the wisdom of Corfu being the chosen holiday destination and, even more so, sitting scantily clad around a pool. Val was acutely aware of any flying insects and treated them all as enemies, so that's where I fitted in. I was able to assure her that day flying moths, hoverflies and chafers were of zero concern. I was also able to reassure her about the local Ichneumon wasps being harmless, to humans, despite their ferocious appearance and lengthy stings. 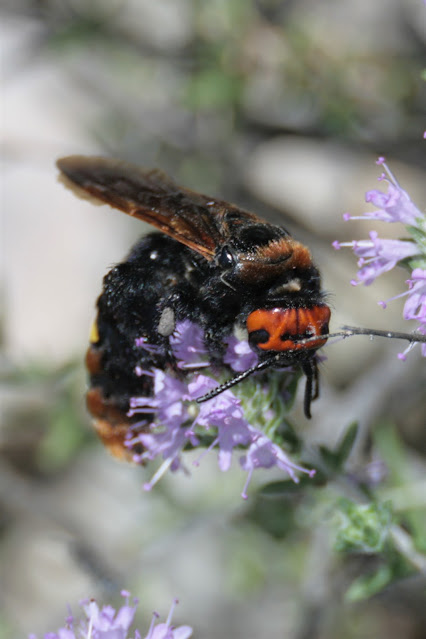 On my wanderings, I'd pot up odd specimens, in order to show them to Bev and the girls. A couple of moths and a Praying Mantis were par for the course but, I did catch one huge insect which I had absolutely no idea about. After the customary spell in our fridge I produced the creature for inspection, convinced that it was a wasp mimic species of some description. At nearly 6 cm in length it was certainly an impressive insect and I said to Val that I'd attempt to get an id when back at home. So that's what I did and boy did I make an error with my initial guess? It was, indeed, a wasp and the largest species in Europe to boot! With the scientific name of Megascolia maculata maculata - The Mammoth Wasp - I had Val absolutely intrigued with the creature contained, although rather subdued because of time in the fridge, within the open topped pot she was holding. So there you have it, a cautionary tale about taking any notice of a long-haired twat you meet on holiday! 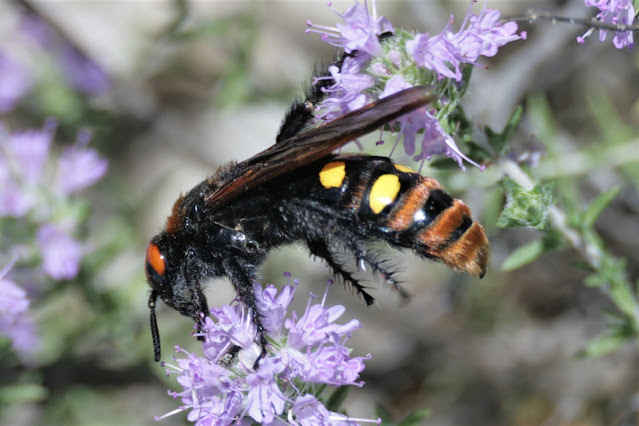