I'd completed my latest shift and was home by 14.50 hrs. It was bloody freezing outside, with the thermometer still sub-zero, and a stiff breeze doing little to assist the situation. However; the sun was attempting to break through the high cloud and I'd promised Bev that we'd get out for a walk. So we did just that. I drove across to Government Acre, over at Westcliffe, and we took a brisk stroll down onto the beachside pathway before ascending back up to the cliff-top via "The Chine". It was bloody freezing and there was little to commend our efforts, even less likely, incite others to join in with this, healthy lifestyle, gig. 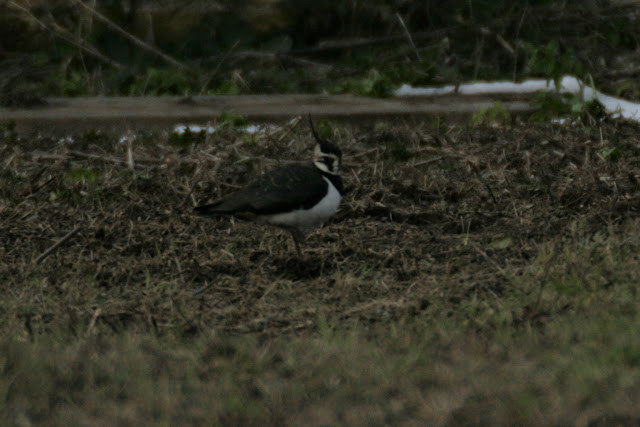 However, when we got back up to the cliff-top, behind Westcliffe Terrace, a Woodcock flew over before dropping down into the care home grounds just behind the play area. We hadn't walked another 100m when I spotted a Lapwing hunched up on some bare ground beside the terrace wall. Windchill was a real issue and we were glad to get back to the van. We'd been out for less than twenty-five minutes but, that was long enough, under the conditions, so headed back homeward. As I turned into Vine Close, from West Dumpton Lane, another Woodcock was spotted flying over the bungalows headed towards Ramsgate Cemetery? What's going on?? We got settled back indoors, coffee and San Miguel, you work it out?  I retired to the study and my laptop. The football was rather amusing, good old Liverpool? However, at 17.10 hrs I spotted a Woodcock flying north, low over the Newlands Farm fields, then another and another! In less than five minutes I'd seen seven!!!!!!!!!!!!!! Can't be sure that there were seven individuals involved but, whatever, it is a bloody amazing record for a Dumpton garden.

BWKm0 - No. 45 - Pied Wagtail - one flying west, as I filled the garden feeders ,prior to our walk