A Barney (Rubble), my barrow, a kite and more

The two sessions have now been completed and, to be fair, I've struggled for bites. There is no getting away from the obvious fact that water temperatures are very low, 40 F, therefore not particularly suited to fish feeding. My perch efforts were a complete waste of time, not a single sign in over three hours at the club fishery, on Friday afternoon. I was back out at 05.15 hrs, today, headed out onto the marsh for a spot of pike angling. All three rods out by 06.50 hrs, it was just twenty-five minutes later that a popped up sardine was taken and the alarm rattled out its' audible alert. It was a stubborn, yet unspectacular, battle resulting in my first pike of 2019 being drawn over the net chord. A cracking fish, of 12 lbs 12 oz, was rested in the retaining sling whilst I awaited the light to improve before I got my photos. Well, that was it! I remained on the bank until 11.45 hrs and didn't have another touch in spite of leap frogging the rods along a 400 m stretch of the drain. 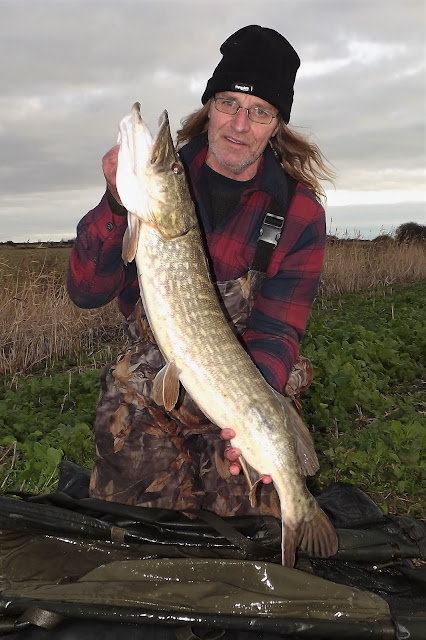 To be honest, I don't think I could have done much more with my dead bait presentations having ringed the changes with buoyancy, colour and flavours. This drain is over a mile from where I am able to park my van and, therefore, involves a trek along a winding track to reach it. Since I managed to acquire a, secondhand, Mk 2 Carp Porter barrow this task has been assisted greatly as it ensures that tackle choice is not restricted by what I'm physically able to carry. Pushing a barrow is far easier than struggling with back packs and a rod holdall, over the shoulder, whilst carrying a chair and cooler bag.
I enjoyed a great morning out on the marsh, pike fishing being just part of the experience. I had the binoculars draped around my neck and spent much of the time scanning the surrounding flatlands watching the local birdlife. My mate Neil, the birdwatcher, was out and I watched him making his way around his regular circuit, thinking he must be seeing quite a bit due to the amount of time it was taking. When he finally appeared on the bank side, he raised his arms in triumph asking "did you get it?" As it turned out he'd seen a 2nd year Glaucous Gull, flying along the railway embankment and, to top it off, re-found a Great Grey Shrike which had first been discovered way back in the autumn. So a quality morning's birding for this time of year. I reeled off my meagre list of sightings. Two Little Egrets, two/three Common Buzzards, a Water Rail, Common Snipe, Reed Bunting and Cetti's Warbler, all very predictable. Understandably Neil was buzzing, the Glauc being a great record for the area. "You know what?", he said, "I'm surprised we've not had any Red Kites yet" He couldn't have drawn breathe before I raised my binoculars towards a raptor being mobbed over the adjacent marsh. "There's your Red Kite mate!" and what do you know, there it was. We watched as it gained height and flew off south. He said his good-byes and wandered off leaving me to make a slow pack down whilst continuing to scan the surrounding marsh to the south. It must have been the sixth or seventh attempt when "bingo!" there it was! The Great Grey Shrike, quite distant but completely unmistakable, was perched atop a lone hawthorn in the middle of a large grazing marsh. What a result? It'd been a fabulous morning and I drove home very pleased with my efforts. The weather is forecast to take a turn for the worse, over the next few days, so I've already resigned myself to the fact that I won't be getting back out with the rods any time soon. The coming week of late shifts will allow me to do some local birding. It's been quite a while since I visited the harbour and the under-cliff, this might be a good time to make the effort?