With work dominating, Monday to Friday, I've morphed into a bit of a weekend warrior. The perch search resumed with my first outing of 2019. I arrived at the club fishery well before dawn on Saturday morning and endured a ten hour blank - not a sniff! A decent social, with Benno and Luke joining the project, as we chase that elusive three pounder. It wasn't without incident, although my rods remained poker straight, as the boys employed maggots and, therefore, caught a succession of roach, bream, hybrid silvers, a rudd and a lone perch (1 lb-ish). 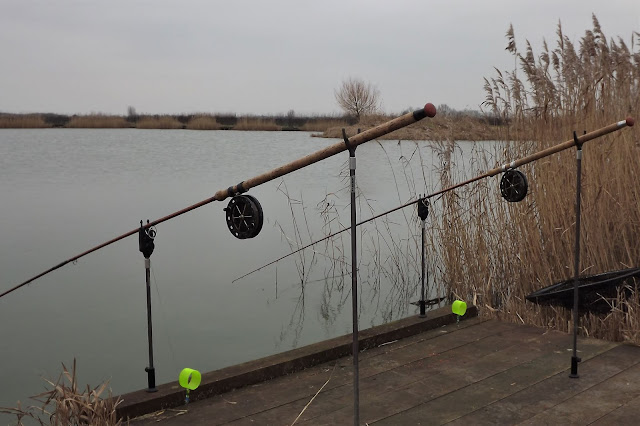 Because of my tackle choice I got engaged in two great conversations, with complete strangers, both were very complimentary about the gear on show. It's rather nice to have such encounters, as it means that the decent side of humanity is on display, especially when I was able to explain the historical significance of the rods to a young lad, who was with his Dad. The other guy asked if he could take some photos, with his phone, so I must have made an impression; although not too sure if that's good or bad? This was the first outing with the Allcocks Match Aerial and Mk IV Avon combo, so I was desperate for a bite!


Well, there was nothing else for it! I went back this afternoon for another session, just a quick couple of hours. Conditions had improved, somewhat, it being far less windy/chilly and the cloud cover was much higher, thus light levels were better. Over an hour had elapsed, without a bleep. The only highlight being an adult Whooper Swan, which flew past, in the company of a dozen, or so, Mute Swans. They did a sweeping arc, out towards Sarre, before setting off towards Stodmarsh and The Stour Valley. It was well after 15.00 hrs when the signs started. Odd bleeps, of the alarms, and taps on the rod tip. I kept the prawns sections going in, little and often, and it was just before 16.00 hrs when I had a confident pull and MISSED IT !!!!!! It didn't end there, oh no. Within ten minutes I had another chance and didn't touch that one either. What's going on?? I'd already got the majority of the gear back onto the barrow when the alarm sounded for the third time, in little over twenty minutes. Glory be, the hook hold was good and after a very interesting battle, with the new set-up, I slid the net under a superb perch of 2 lbs 6 oz. Never has a perch been more welcome. Camera and tripod back off the barrow I went through the self-take ritual before packing up properly and  making my way homeward very pleased with a result which had been hard earned.

The Mk IV Avon is going to take a little getting used to, it being of a far lower test curve than the original Mk IV's, although the through action is a joy to witness and the rod a delight to hold as the fish battle in their watery domain. The perch which christened the rod did me proud and tested the kit to a decent level before coming to the net. I think I'll need to hook a few scamp carp, to see how the rod copes, before thinking about taking it down to The Stour for a barbel/chub session.
Now back to five days graft, including fifteen hours overtime, thus money to be earned. By working extra hours I am able to purchase the whimsicle odds and sods, which enhance the enjoyment of this incredible hobby, without impacting upon our day to day finances. Sure I'd like to get out with the rods more often but, then again, it's a hobby that I enjoy; not my job! By keeping work and play separate, I'm able to make the best of both worlds. I work hard and play hard, yet know I can't have one without the other.
Posted by Dylan Wrathall at 19:25