Right up until the middle of November, the perch project was just fumbling along with no signs of me actually learning anything about the fish I was after, let alone catching one! Although the venue I targeted had produced some spectacular fish, during the previous season, I failed dismally. Location, or rather lack of, being the major obstacle, I simply didn't find them. My salvation came about as a result of a club work party, over at Marshside. The club secretary telling me about some perch that had been taken in a recent match. Very interesting and enough of a story to encourage me to swap venues and have a bash. That very first visit was all I could have wished for, two two's landed and plenty of other signs of perch activity. At last I was on a venue where I could develop my techniques as I seek that three pounder; a fish which will indicate that my project is headed in the right direction. 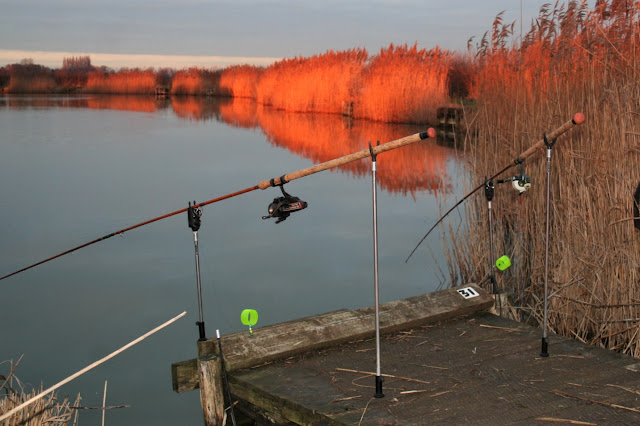 Ultimately, I suppose, the capture of a perch over 3 lbs 8 oz will see me satisfied with these fish and allow me to move on to other species with which I still have unfinished business. I'm not certain that this club venue will provide such a specimen, but the lessons learned whilst fishing here will stand me in good stead for any further fisheries that I visit in my quest. When, at last, I do succeed? Chub is the most obvious glitch in my PB statistics and will probably provide the next challenge when that time arrives. I don't think that I'll ever get serious about tench fishing again? Having experienced Wilstone at it's absolute peak, and being part of that historical period, ensures that anything else will be an anti-climax; no matter what size the tench now grow to. Carp? Well, when I've eventually succeeded in my split cane challenge, I'd like to think that I'll just be able to forget all about them. However, wild carp are very different creatures to those commercial puddle inhabitants and will, I'm sure, continue to draw me back to the flatlands long after the thirty has been secured within my landing net. Using a Dick Walker designed split cane rod just adds another dimension to the experience and it's something of which I hope I never tire. Pike will always be part of my angling year, although I no longer have any great desire to chase monsters (at present). I can't foresee a time when I fail to be excited by the bite indicator registering another pick up of my dead bait. They are the one constant along my entire angling adventure, no matter how many distractions I encounter en route.

Now there is one species with which I'd love to reacquaint myself; Zander! Probably been best part of thirty years since I last caught one? As English as egg fried rice, they are still a species which hold a great many fond memories. People, places, mis-behaviour, generally pulling a few strokes, these fish evoke some of the happiest memories from a period of absolute lunacy. Not too sure if anything will ever become of this desire, but it is certainly something that's on my wish list.
Posted by Dylan Wrathall at 19:42