We'd run out of teabags so, before the day could get properly started, I had to take a stroll up to the shop to put the situation right. It was another clear, crisp morning and the frost indicated a very cold night had just passed. Mission accomplished, I made my return walk to be stopped dead in my tracks by the unmistakable, high pitched, trills of Waxwings. A quick search revealed a flock of nineteen birds perched high in the crown of a small group of Sycamores at the junction of West Dumpton Lane and Vine Close - result! Not only a year tick, but a patch year tick to boot!
I was already thinking about rushing home for the camera when another flock of a dozen or so flew over and the perched birds immediately rose and joined their buddies as they headed off low, skimming the rooftops of Prestege Ave.

I got home and made the tea before informing Bev that I was going out to see if I could relocate the flock. I had an idea that the Rowan berries around The Broadstairs Cricket Ground vicinity might just be the place? I gave it ten minutes, but no sign, so decided to have a quick drive over to the harbour for another bash at getting a photo of that Black Redstart of yesterday's outing. I parked up by Government Acre and walked down the steps to the port entrance then proceeded to make my way towards the harbour. Bingo, the bird was in exactly the same spot as I'd seen it on Sunday. It ranged between the concrete wall, below Churchill's Bar and the concrete arches, quite happy to feed at low levels behind the protection of the wire fence. A dark-bellied Brent Goose, another year tick, was floating about just off the Western Undercliff - home within the hour. Nice! 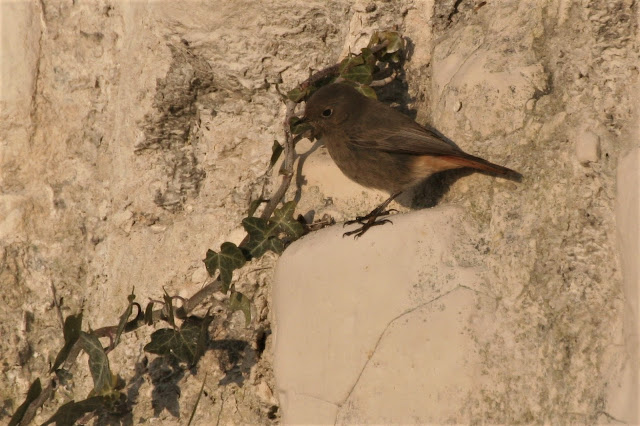