I was on my way before 02.30 hrs and had two rods out, in the new drain, by 03.30 hrs. It was a still, clear, night and, after getting my munga into the swim, I contented myself by staring up into the heavens and watching the stars. Umpteen satellites and a few shooting stars later, the eastern horizon started to brighten and a good fish rolled over the bait. The surface of the drain was rocking and I experienced several liners as fish were feeding on the freebies. My heart raced as a bat hit the line, causing a rapid burst from the alarm - but I just knew my moment was getting close.
A Barn Owl called, somewhere out in the semi-gloom of pre-dawn, and a fox trotted past on the opposite bank, completely oblivious to my presence until I "squeaked" it. As the light intensified, so the natural world started to awake. Skylarks and Green Woodpeckers made for a strange mix of sounds, there was a distant Tawny Owl hooting away and a Cetti's Warbler exploded into song very close by. I had just picked up my binoculars and was watching a juvenile Sparrowhawk hunting a side drain when the right hand rod was away. A dogged, yet unspectacular, battle ensued before I drew my prize over the net and she was mine. A magnificent Common Carp weighing in at a very pleasing 21 lbs 14 oz - I sorted out sacking the fish, prior to getting a few photos, then set about getting the rod back into the fray. 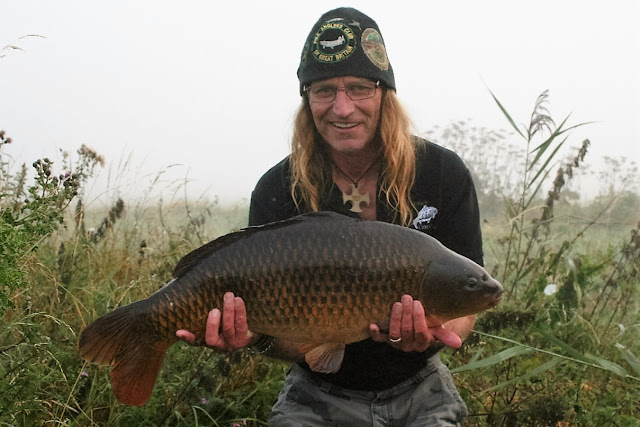 I rang Benno with the news before getting my camera gear set up, not exactly as I'd like - the dawn was very still and dank, with associated mist covering the surrounding marshes, thus light levels were not conducive to decent images. Still, I did my best and hope that Camo appreciates the effort that went into getting one with his "T"-shirt on. Happy days! 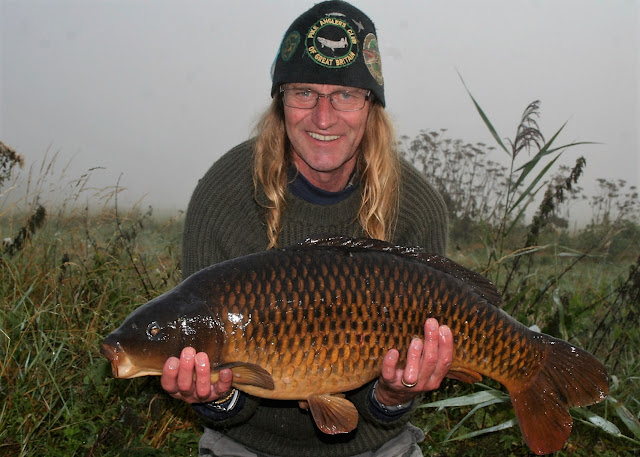