Just when you think you've got it cracked, life kicks you up the arse then sits you on it! Bev and I are really struggling to maintain a grasp of reality, as my father's deteriorating health impacts directly on our daily routine. We're a tight knit family and will overcome whatever life throws at us, yet short-term, we are living each day at a time as we attempt to deal with the situation.
So I am very sorry for the lack of posts about anything remotely current, or interesting, that's my life, in a nutshell, I suppose? I did see poor old LGRE (UK 400 Club) moaning about being "vilified" for voting leave, shame; surely he's gotten used to being in the firing line by now? My split cane carp fishing project has been suspended, for the foreseeable future, as have any thoughts of mothing, butterflies, birding and other general outdoor stuff. However, just as there is very little sympathy with the plight of Lee Evans, I don't expect any to be directed towards my present predicament. We will come through this experience stronger and closer together, ready to deal with whatever else fate has in store.
Benno and Simon turned up this morning, to spend some time with Dad and we had a chat about our plans for a Mk IV challenge now that Simon has recently taken delivery of a Bruce & Walker, glass fibre, Mk IV Avon rod which he has already christened with a couple of River Lea barbel and a few Long Shaw carp. We've not made any decisions, although perch do seem to be a prime candidate for any type of three way adventure - a three pounder on a Mk IV and a centre pin might be a decent starting point. Simon has the Grand Union on his doorstep, Benno, and I, The Royal Military, so perch from a canal could be the level playing field we require. Obviously, there are plenty of other avenues open to us - we'll see how it pans out?

I was showing them some of the old photos, I'd scanned, Sye commenting on the Tiddenfoot days and the great lessons we learned as that particular project unfolded. By today's standards, those fish were tiny, but what a great time we had as angling skills were honed in the pursuit of our dreams. 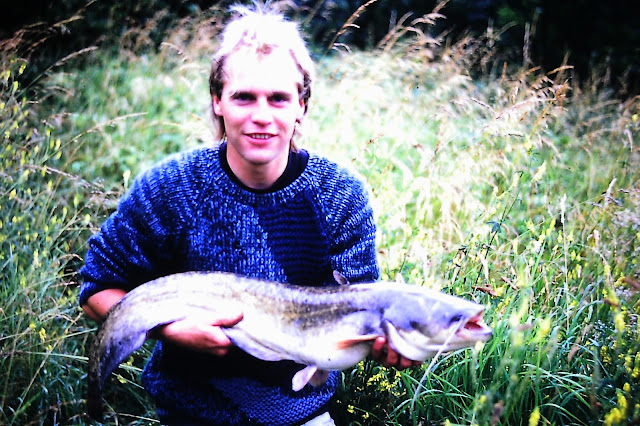 I am now able to look back at those times through "rose tinted glasses" - although it is without question that we had a blast, catching plenty of fish for our endeavours. I never came close to a "big" fish from this venue, my best being under 15 lbs. Sye did get a "twenty" from the pit and I was beside him when he lost a fish which did him up like a kipper, and that doesn't happen too often,