Where is this going?

There was a Chiffchaff, probably the bird seen in our garden, flitting about in the hedgerow at the end of Vine Close as I walked across to work yesterday with a second individual calling from the shrubs beside the entrance to Blaze Neon over at Pyson's Road. A Great Spotted Woodpecker was drumming in the trees around the main farm buildings, over at Newlands and I'm sure that I heard a Firecrest (although not 100% - so I haven't added it to my year list) as I walked the footpath between Park and Prestedge Avenues. A couple of Jays were foraging in the garden this morning and the feeding station continues to attract a reasonable selection of species, for the time of year. So, with all this going on, I'm able to find interest whenever I feel inclined to look. However, there is one species dominating the Newland's Farm area - Wood Pigeons, in their thousands, are absolutely hammering the cauliflower crop.
I am not sure whether the crop has "gone to seed", as much of Mr Burbridge's had done before Christmas, or if these are a late variety still awaiting harvest? There's well over 100 acres - that's an awful lot of caulis!
Twice, in the past week, there has been a guy out there shooting. All legal and above board I would imagine. He had a portable hide and decoys set up and was clearly visible from the main road and public footpaths.
Was he engaged in crop protection work, or simply partaking of his chosen hobby? Unless I actually go across to have a chat with him I doubt if I'll ever find out.
As soon as shooting gets mentioned there will be people getting hot under the collar. It is a subject which will never find consensus amongst a section of the public, no matter how you dress it up. My personal opinions are based upon two factors - a) I'm a carnivore and b) although not a shooter myself, I have friends who are and, in their company, I've experienced many days out on a small syndicate pheasant shoot in Hertfordshire.
Being a carnivore, by definition, means I eat meat. This is not a food source that can be obtained without an animal having to be slaughtered. Tesco's, Sainsbury's, Asda and all other retail outlets have removed the "guilt trip" of butchering animals by slick marketing and fancy packaging. Your pork chops are still a dead pig and steak is an ex cow! That we are now, so far removed from the actual killing process, almost alienated from the basic facts of the food chain; in order for us to eat meat - creatures will die. Does it matter if a guy shoots his food or is it only OK when someone else has done the deed on your behalf?
Oh! but I'm a vegetarian - maybe that guy, pigeon shooting, was only out there protecting your lunch? These same retail outlets that sell sanitized, pre-packaged, dead animals are major players in the farming game - they dictate the price that a farmer will receive for any given crop. In order to be able to provide cauliflowers at 70 p/each Wood Pigeons need to be controlled? They have died in order to protect a vegetarians option not to eat meat - what a surreal concept?
When I first started my employment with Brooke Bond (who became Brooke Bond Oxo before being taken over by Unilever) I came into contact with Steve Baron. To this day, he remains a great and very dear friend, he was shooting man, as were many other members of that small factory workforce. It was through this contact that I was able to spend time, as a beater, on the shoot of which he was a member. Over the years I took both of my children to see how the shoot functioned and to allow them to make their own minds up about the cruelty aspect of the process. (As opposed to being told, by some left-wing school teacher, that it is so!) 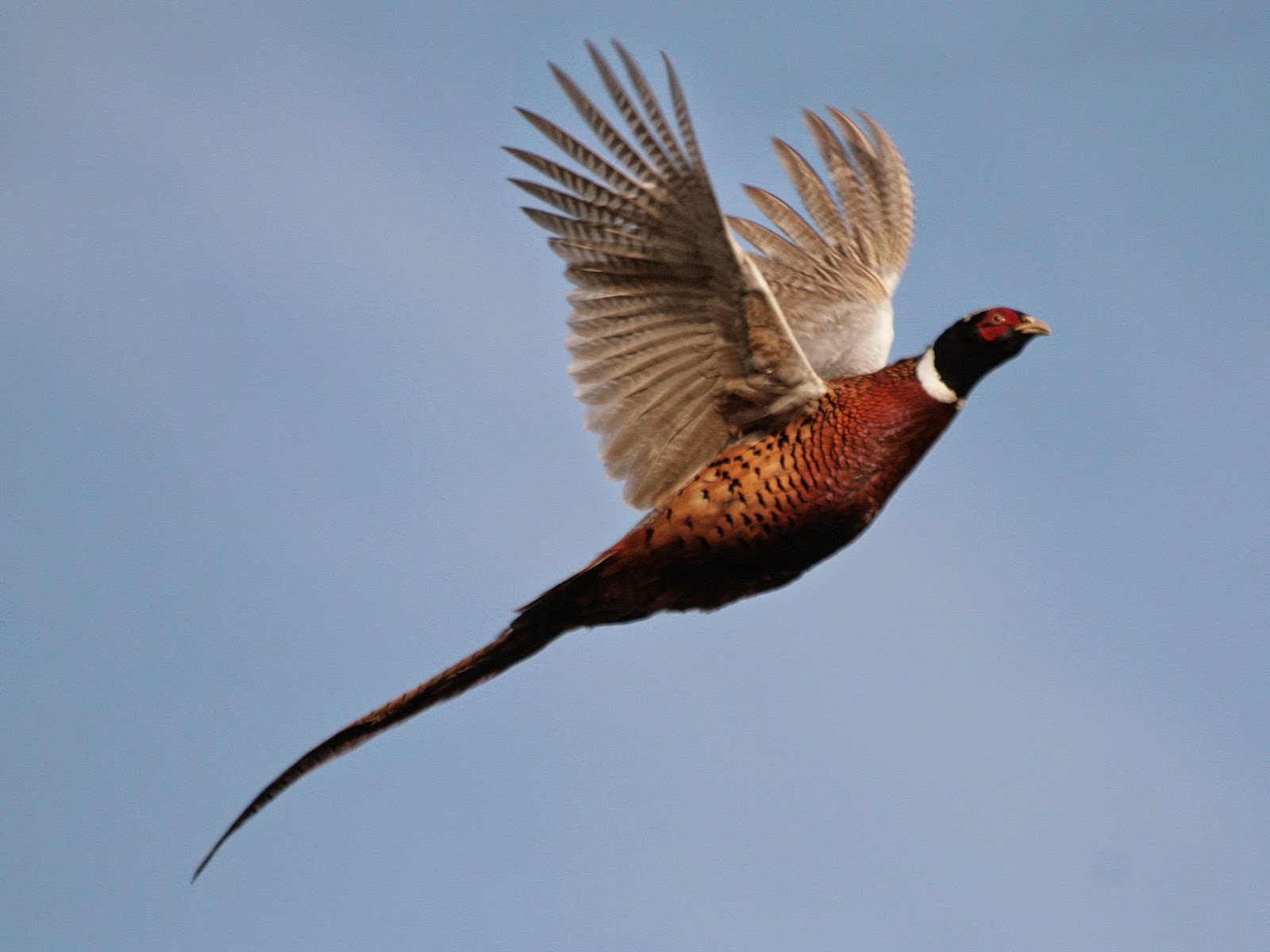 Sarah-Jayne didn't object, although she is now semi-vegetarian, but wasn't overly happy with the killing, Benno loved it - although he's never looked to take up shooting as a hobby himself. Two individuals who have come to differing opinions based upon first hand experience; I'm perfectly happy with that.
The syndicate consisted of sixteen paying members (guns) - they shot every fortnight between October and January, eight shoots in a season.The average bag was between 50 and 70 birds, enough for a brace apiece for the guns and a few birds over for the tenant farmers, who's ground we were on, and the beaters if they chose. Nothing was wasted, birds had not died as a result of "blood-lust" they became part of the food chain, just without a KFC logo. I will admit here and now that I wasn't a beater because I wanted to be part of the "County Set" - Oh no, there was much more to it than that! Some of the guns were also landowners whose ground contained "private" lakes. My involvement in this country sport was an avenue for me to pursue my quest for big fish - via a different route to the majority of other anglers. By steering the conversation towards angling, during the breaks between the various drives, I was able to gain permission, get an invitation, to fish several very special venues.
So I am not anti-shooting, as such, but what I can't align myself with is the industrial scale slaughter, that masquerades as a country pastime, and is, in reality, the egotistical playground of the ridiculously wealthy. Guys, with more money than brain cells, slaughtering reared birds for fun - they certainly ain't doing it because they're hungry! This aspect of the "sport" is indefensible - rich guys killing thousands of birds per day because they can. This industry generates £billions during the course of a season and employs many decent folk who are simply trying to earn a living. I also work in an industry which generates £billions during a financial year, yet I'm not despised, because our business has no direct link with shooters and shooting? I wonder how many of our senior management/directors choose to spend their money to be part of this social set? And this is applicable to all successful companies - the wealth created allows individuals to make choices. You don't have to wear Tweed jackets and Plus-fours, at work, to be a shooting man. It is far more likely that a suit and tie will be the daily attire and a flat cap and Barbour jacket is for the weekend only?
I've seen the recent posting, on Birdguides, about the demise of the Norfolk Little Bustard - I am appalled by this crime, but not to the extent that I've lost sight of reality (read the comments for a better understanding of where I'm coming from!). There are other articles in the thread which are of equal dismay - Goshawk killing and the persecution of English Hen Harriers - acts of undeniable selfishness and total disregard of the laws, therefore, abhorrent. That the perpetrators are described as gamekeepers has tarred an awful lot of good guys with the same brush. Crimes against our wildlife are crimes against us, our children, and our children's children! These acts are deliberate attempts to devalue the natural heritage of our countryside - we do not own these creatures but, are merely looking after them for future generations!
I've always tried to keep in with the farming community - after all they control an awful lot of our countryside.
When I first moved to Kent, in August 1993, I quickly established contact with one of the local farmers. As a result I was able to wander over vast tracts of farmland, purely because I'd made an effort to introduce myself and not offer advice on how best to run a farm! I can still go there today, and many other farms as well, because I am not seen as the enemy! Birders, unable to see shooting as a legitimate pastime, whilst munching on a Mc Donald's chicken burger  - anglers who see Otters as the bad guys in rivers which contain illegally stocked barbel. Is it any surprise that an "us and them" mentality exists whilst single subject fanatics are claiming to be naturalists! Is it an age thing, or my industrial background, that has allowed me to see a "bigger picture" ?
I don't have all the answers - if any at all? However, I do have nearly sixty years on this planet and, as such, an inkling of what it's all about?