Exploration of my journey

It might appear, to some who have followed this, and my previous, blog that I'm loosing my way and straying widely from the general subject matter which has been at the core of my offerings since I started out. Some of the more astute might recall a series of posts, from a year or so back, when I mooted the desire to write a book?
Well, I still haven't written it; but the project is gaining momentum and odd chapters (rather a grandiose term for a saved word document?) have been assembled. Therefore, my recent posts have been a direct spin-off from my own investigations into my past. The most intriguing result of this process has been the realisation of what a major part my work, and working environment, has played. Some of the most extraordinary and influential characters in my development have come into my life purely as a result of my employment. Without their input I am sure that my life would have been more akin to a "Pin-ball game" rather than a "Roller Coaster ride"? I have no doubt that my love of the outdoors would have been there, but my realisation of how precious these encounters are, how they should be savoured and enjoyed, are because of the work ethic and values from the other side of my life's coin.
I had a draft post, which I've long since deleted, entitled "Heroes". I'd listed ten people who, I felt, had played an influential role in my life. There were anglers, birders, friends, musicians and work colleagues included, if that book ever comes to fruition, they will all receive their rightful thanks. But, just to demonstrate quite how diverse these people are - I will give an insight into the individual who was at Number One in that original post.
Her name is Sarah Frost (or that was her maiden name - she got married during the time I worked with her but always remained Sarah to me) I first came into contact with her when she, as a very young post-graduate, became project manager for the Cup-a-Soup granule manufacturing facility at the, Unilever owned, Ashford factory. To say that we didn't get on would be an understatement - there was real hostility. Why have we got a girl in charge? She oversaw the introduction of two Fluid-bed Agglomeration units - ensured that the product quality was sustainable then went away to further her career within the organisation. It was probably two years later that she returned to Ashford, but this time she was back as factory manager! Unilever were undergoing a period of restructuring and change - Global branding was becoming the driving force. Sarah was charged with raising efficiencies and cutting costs - same old money driven reasoning. At her introduction to the factory workforce she said that her door was "always open". I gave her a few weeks, then decided it was time we had a chat!
Our first conversation was an enlightening affair - I asked what it was I had to do to ensure that it wasn't due to me, or my influence, that the factory was forced to close. Sarah's response was as brave, as it was honest, - she welcomed my openness and invited me to attend a "Factory Strategy Group" meeting. If I do ever write that book, the rest of this tale will be told. All of a sudden my eyes were opened to the complexities of running a large factory, the role that being part of a Multi-national played in the day to day decision making process and the need for compliance, with an ever increasing legal responsibility, played in the way our business could move forward.
I hope that I contributed as much as I took from this exercise - I learnt an awful lot about myself and what a complete arse-hole I had been. There is no "us and them" in a successful business - teamwork is key, fundamental, underpinning everything that will ensure sustainable growth and prosperity. Sadly the hard work that Sarah put into the Ashford factory was brought to a shuddering halt when Unilever purchased the Knorr brand and the Mergers and Monopolies Commission forced them to sell the Batchelor's brand - we were taken over by Campbell's - who only wanted the Fray Bentos brand in reality. It was time for me to seek adventures new, after eighteen very happy years with the company I took redundancy, but that is another chapter all together.
Sarah is probably high up within the corridors of power in some multi-national or other - she might well be a working mum? I simply don't know. That I owe her a great deal of thanks, is why I've made this post, she truly was the most inspirational individual within my journey to where I am now. I hope that I repaid her faith with my own contribution to the "bigger picture" within her factory - they were very happy, educational times. 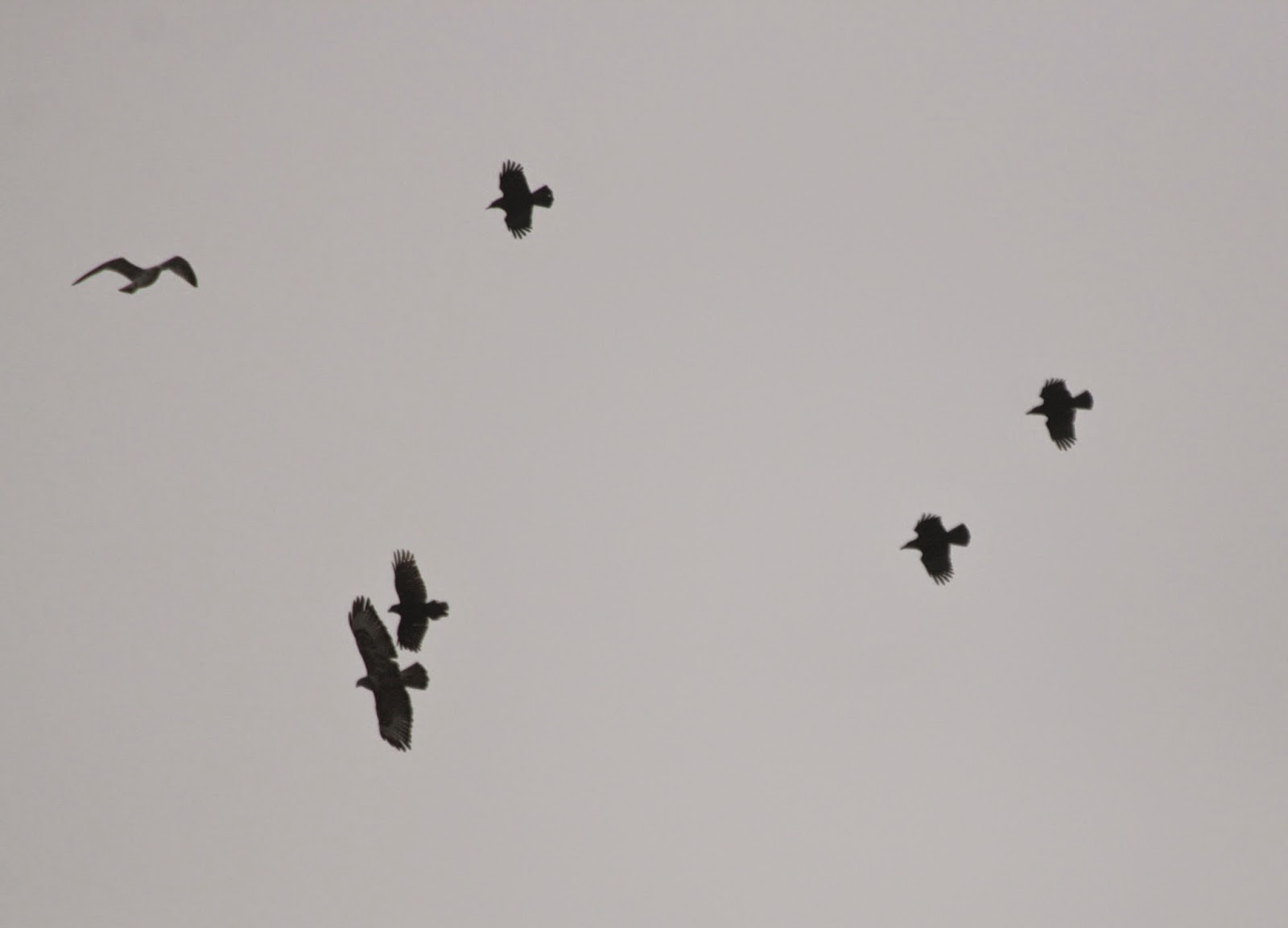 Just to show that I've not lost the plot entirely! At 13.25 hrs, yesterday, just as I was feeding the birds in the aviary, the gulls went nuts over Dumpton. The weather was anything but typical raptor migration conditions - grey and overcast. My immediate thought was an owl, but no, a Common Buzzard appeared - complete with the accompanying guard of honour - Carrion Crows and Herring Gulls giving it a hard time as it headed north. I managed to grab a few dodgy record images before I had to be on my way to work. A genuine migrant, it would be incredibly early, or a wanderer from the local breeding territories?
Posted by Dylan Wrathall at 10:54