My recent dabbling with carp fishing has been a very steep learning experience; some of the modern techniques (especially rig mechanics) are way beyond anything possible in the "80's". Modern hook-link materials and the use of safe-zone leaders are massive advances in rig effectiveness and fish safety.
All that accepted, there are still a majority of "casual" carp anglers who place more importance on what is on display on the bank than what is actually presented in the fishery . Tackle Tarts - and the more time I'm spending at Sandwich Coarse Fishery, the more I am starting to look like one!!!
I've started to use matching rod/reel combos, on buzzer bars with matching Optonic alarms, snag ears and day-glo indicators. It's almost like I've developed into a carp angling clone? But; this is a very much tongue in cheek display. The rods are two 1983 Duncan Kay's with flaking varnish and twin-legged Seymo rings - they look very tired. Reels have ranged from ABU Cardinal 66X's, through Shimano Speed Master 5000's to Matt Hayes "Limited Edition" Centrepins - No.s 54 & 55 - just how much more tarty can I get?
I have spent a number of "Sundowner sessions" recently (15.00 - 19.00 hrs) and am starting to get a feel for the venue. My results are very patchy, but I do think that I'm starting to build a picture of the fishery and give myself a reasonable chance of a successful conclusion to this project. I am happy with my particle approach, knowing that the vast majority of other anglers are boily fishing (Cell boily fishing to be exact).
Gadget and I had a session there, yesterday, we both blanked! Being a Sunday, and us turning up mid-afternoon, swim choice was very limited. We shared a corner swim, so shouldn't be too surprised by our failure. If I can get down during the week, then I am confident, given a choice of swims, I will have a good chance of adding to my tally of carp from the fishery.
It was a beautiful afternoon, clear blue skies and wonderful sunshine but, as the sun dropped so did the temperature. It was 9C when we left, it had been 17C during the afternoon. A large moon dominated the heavens, as we packed up; those guys who were there for the night could expect to get cold. The forecast for the coming week is changeable - not too much of a surprise for October? It is this drop in temperature that should trigger a feeding response from the carp. Winter is on its' way and the fish will feed up in preparation - well that's the theory. I wanted to get a night session in but, might, have to opt for a full day instead.? Twelve hours should allow me to build up a swim and get a bite, or two?
My day-glo indicators are made from the "Gatorade" drinks bottles - the cylinder cut from the centre section before being cut and shaped, the final shaping achieved by placing the plastic in a bowl of hot water. It might well evolve into a post at some time? 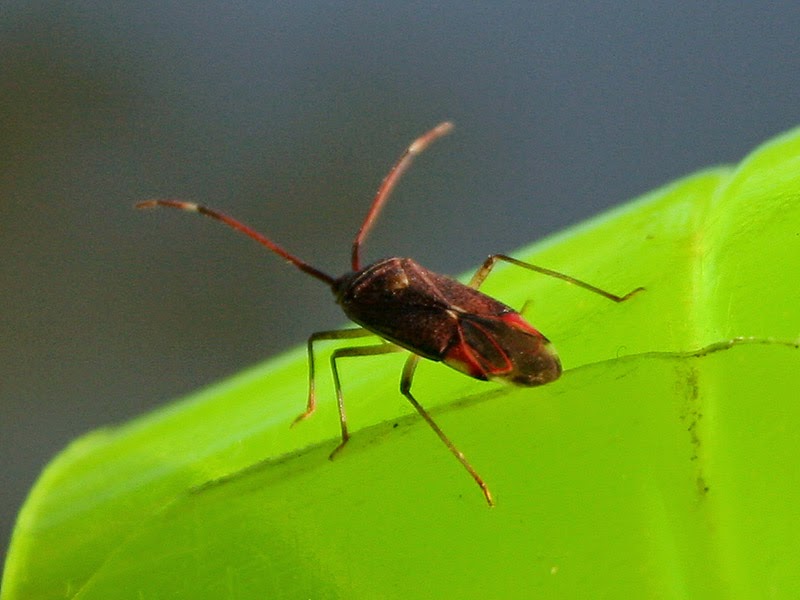 It was while I was fannying about, yesterday, that my attention was drawn to an insect which had landed on one of these indicators. I've never, knowingly, seen one previously and had to use my camera on "close-up" mode, due to the fact that I didn't have any extension tubes with me. It is a Mirid bug of some type; my best guess is a Deraeocoris sp. (possible D. ruber?) Sandwich Coarse Fishery is a very pleasant place to spend a few hours. It has a good vibe and the surrounding countryside is home to a wide variety of wildlife - I love the place. 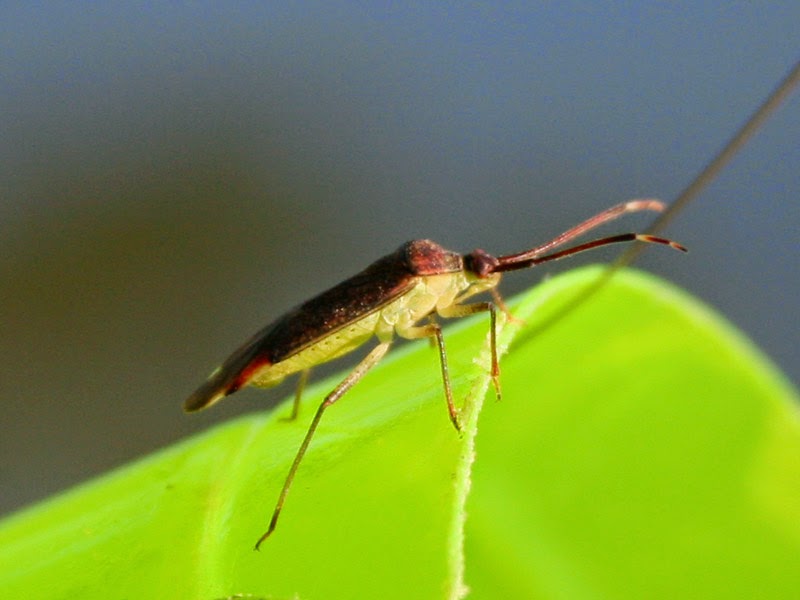