It was the last day of August when Nick Ash, the Newlands Farm owner, finally managed to get the contractors on site to cut the corn in the field directly beyond our boundary hedge. Within a couple of days the field had been harrowed and the local population of Feral Pigeons descended on the area with a vengeance. Wood Pigeons and a huge mixed flock of corvids also joined the party to feast on spilled seed and disturbed invertebrates.

On the 12th September I recorded the first Raven, since the Spring, from the garden and then a little later my first two Grey Wagtails

The decorating of our bedroom is currently "in progress" and we have confirmation that 23rd September is when the carpet will be replaced, thus I am confident that we'll have the bungalow back to some type of normality before October and the start of the "Pike season"? Not too much else to report. A Western Conifer Seed Bug turned up in my study a couple of days ago. I potted it up and stuck it in my fridge, only to forget about it until I went to grab a Fanta this morning. I got my photos then released the poor creature back onto our "Christmas Tree"

As I'm sat here, typing away, a 1cy male Sparrowhawk has just landed on the fence of my next door neighbour. I managed to grab two token shots before it flew off along the gardens. 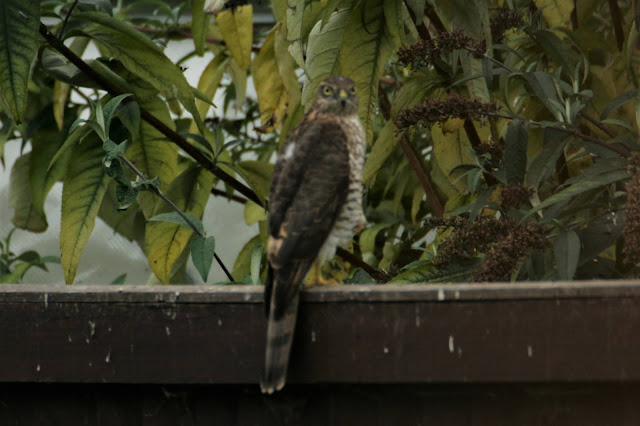 Quite a bit to look forward to before Pike season kicks off. Bev and I are off on an adventure on Friday and there has been a very strange twist in my retirement routine which might just provide another avenue to explore? The only other news, of any consequence, is that I shot the first Brown Rat of the autumn, underneath the feeding station. Nothing too surprising as the annual harvest always displaces these creatures and all of us, who's properties back onto the farm, see them in our gardens.