The syndicate fisheries continue to be central to my angling efforts whilst I await the start of the new season. Because of the geographic location, it does mean that I've got something to look at/for whilst awaiting the alarms to signal some fish-type activity. It was talking with Bev, about my meagre results, that I realised that I was morphing into a carp faggot! Time is, once again, becoming a major factor in my approach. Okay, I don't do overnighters, but still happily spend eight plus hours sat behind cradled rods in the vain hope of a bite. I got home last night, after my second biteless session on the spin, determined to change things about. 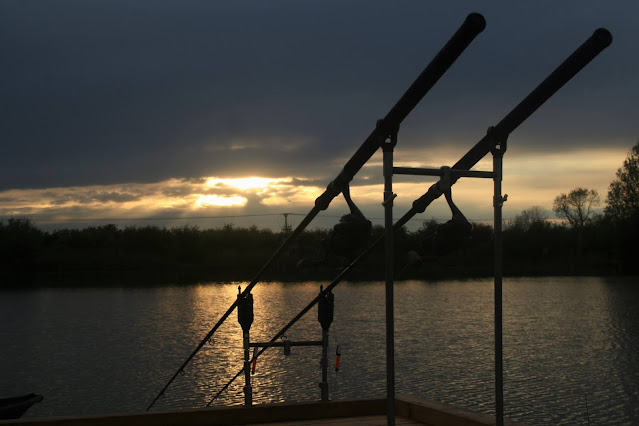 No time spent at the fishery is wasted however and, yesterday, I'd located a decent group of carp just before the onset of a two hour long deluge of heavy rain with accompanying thunder, lightning and blustery winds. The moody skies gave me scope to play around with the camera kit but, as I said, the rods remained inactive in their carpy pose. A check of the BBC weather page suggested that I might have a short window of opportunity this morning, with light winds and broken sunshine, and I took a gamble. Armed with a single 1959 Mk IV Dick Walker split cane, fitted with a Mitchell 300 loaded with 12 lbs bs floating mono, a small Nash "Bolt Machine" and a three foot hook link of 8 lbs bs line to a size 8 "wide gape" hook I set off back down to the fishery, via the local Premier shop to grab a couple of packets of dog biscuits and a wholemeal loaf. Landing net, carp cradle and weigh sling were already in the van so the only other bits required were a camera and my binoculars.

There was a far more northerly bias to the breeze than I'd expected, but I went about the ritual of catapulting out a scattering of freebies in several swims on the west and south banks of the venue. There was one other member at the fishery, bivvied up in the swim where I'd taken that Mirror from last week, so basically I had the run of the place. It was probably twenty minutes before I saw any signs of carp activity and set about getting the rod and landing net readied. I think I made two casts in twenty minutes, hectic it wasn't, but I was starting to see signs of activity in a couple of swims on the south bank. Off I went. Again I was seeing just the occasional sign as the odd floater was taken, certainly no pattern to this feeding behaviour. I got distracted by a group of seven fish, basking in a sheltered spot on the eastern margin, but they soon melted away when I scattered a few dog biscuits in their direction. It seemed that I was destined to continue my struggle. Thankfully, two carp decided that they were hungry enough to start slurping down a few offerings and, by studying their movements, I was able to ascertain a patrol route and get a cube of Warburton's wholemeal in position to intercept the next patroller. It worked like a dream! A dark shape appeared beneath my bait then, without any hesitation, it was gone and the rod hooped over as I set the hook. 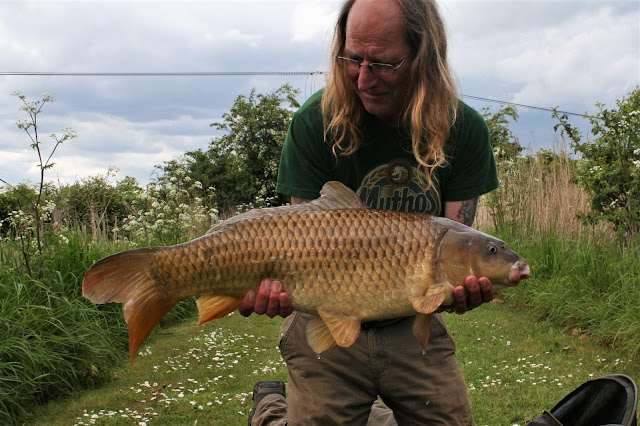 An absolutely magnificent battle on my ancient tackle, never once did I feel under-gunned. I had to play this fish through freshly emerged wild lily beds and marginal rushes, the rod flexing down to the cork handle. The Mitchell 300 was a joy to use, as I've stripped the spools back and used silicon grease to lubricate the drag mechanism; bloody great. My prize was a stunning Common Carp of 15 lbs 3 oz and all that I wished for. However greed kept me searching for a second opportunity, which never materialized, and it was the deteriorating weather conditions which saw me pack my kit away and head back for home little more than two hours after I'd arrived. Just what the doctor ordered!