Two coins and a wry smile

This is a cautionary tale which I recall, with great amusement, now that the initial disbelief has abated. Just like many other people, I guess, all my change (1, 2 & 5 p's) is chucked into pots and ice cream tubs whenever it starts to build up in my wallet. It's done for no other reason than to get rid of the shrapnel, nothing more ambitious. A couple of weeks back, when the Saturday was a write off due to heavy rain, I must have been extremely bored as I started to sort it out and bag up the 5 p's. To my delight, and surprise, there was over £35 worth of these tiny silver coins and I could only guess at the value of the coppers? Certainly lost interest by this stage, so counting it was never likely to happen. What I did do, however, was to search the internet for a method of cleaning these coins, just like we'd done as kids with those pennies given us by our grand parents. Plenty of commercially produced products available, yet I was drawn to the use of white vinegar, as suggested by some coin collectors, and decided to give it a bash. I had one small problem in as much as there was no white vinegar in the cupboard, so normal vinegar, watered down, would have to suffice. I grabbed a dozen, or so, 2 p coins and dropped them into the solution. Thirty minutes later and I fished them out, very impressed by the result. Although the coins weren't gleaming, they were far cleaner than when they'd been dropped in. A quick going over with a toothbrush, then a buff up with a soft rag and "Brasso" - job's a good'un. Now this is were the fun started. Out of curiosity I checked the dates of these coins and discovered that one of them was minted in 1971, the year when the UK went decimal. 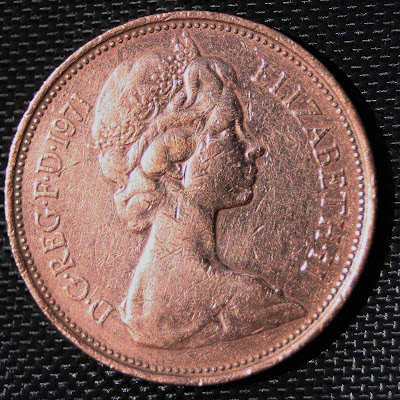 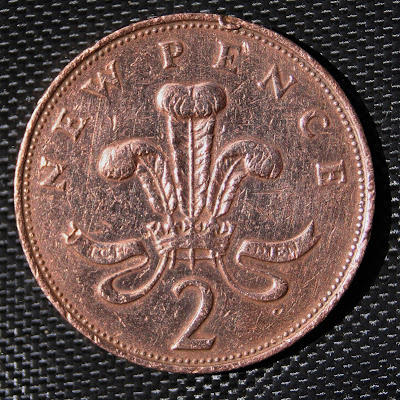 Like an idiot, I Googled the value of such a coin, being directed straight to Flea Bay. What the f**k? There were three coins, of this date and denomination, the cheapest one on offer at £4,725.
"Bev, quick, get here!" That's a holiday in my money and I'm already starting to doubt the wisdom of cleaning the item; probably knocked a grand off its' worth?
Fortunately Bev is far more level headed, than I, where money is involved and suggested looking at a coin dealers website before counting the profit. Good advice, the real value of such a coin is around $8, and that's the US dollar, so not even £8! Quite what those chancers, on Flea Bay, are hoping for is a mystery but, as I've been told, it's only worth what someone else is prepared to pay. So instead of paying for another trip to Kefalonia, whenever we're able to get back there, this new found wealth won't pay an hour's airport parking at Gatwick.
So what about the second coin? This one is a part of my family's history and was found in the box which also contained my Great Uncle Joe Lawrence's WWI medals. It is a George V one penny, dated 1916. Joe had signed up as a 15 year old and served as an infantryman throughout the entire period. The horrors he experienced went with him to the grave, never once did he mention the war to us kids. 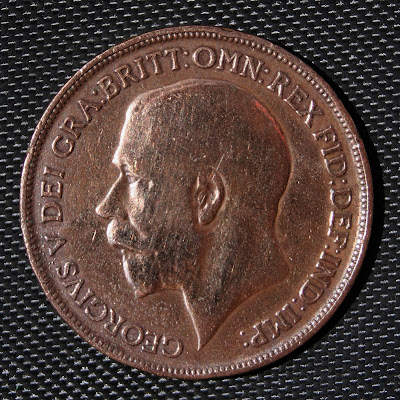 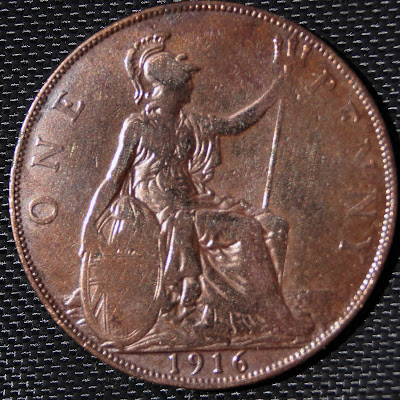 That same coin dealers website has similar coins on offer for around $50. The one that sits proudly on the shelves in my study has no value that money can attain - absolutely priceless.
So there you have it, a two post day and further exploration of "New Blogger" with all it entails. Early shift for the coming week and, hopefully, some light shed on what happens next in the redundancy situation? All I want is a decision, a finishing line, then can start to plan for the future. Not knowing is the hardest part of the current state of play. Here's looking forward to a resolution for the Fuji SIS redundancy chaos and, hopefully, not the nonsense akin to a Google search. Senior HR personnel,  actually being on site, might be a good starting point?
Posted by Dylan Wrathall at 15:57