When Bev and I first moved to our bungalow, way back in November 2000, there was no way we could have foreseen the journey ahead of us. My transition from birder/moffa back to specimen hunting was still over a decade away and establishing our garden as a wildlife friendly environment was one of the top priorities. Fortunately for us, Brenda, our next-door neighbour was already well ahead of the game in providing food for the birds and hedgehogs which visited her garden. Indeed, so committed to attracting the local hedgehogs that she'd had a cat flap fitted to her conservatory but removed the flap to allow the animals free access into her home. I must add that at this time hedgehogs were extremely numerous around the locality, large numbers of road casualties indicative of a very healthy population - although not the sharpest pencils in the box! I'm not exactly sure what Brenda used to feed the animals, but feel bread and milk was involved along with cat food. So numerous were these visitors to the garden that I had to surround the moth trap with a wire mesh fence to prevent moths getting taken off the sides.

Then the population absolutely crashed, decimated by disease/habitat loss, to a point where they simply disappeared from the Thanet (UK?) gardens. Road casualties were non-existent, hedgehogs facing extinction in the UK countryside was a message coming from the various wildlife trusts and agencies. I didn't encounter a living animal for several years, any roadside corpse called a "deadgehog" and was something of note around the roadways of East Kent. I'm no expert in the ups and downs of this hedgehog saga, dates and data are not something which stimulate me to get involved with wildlife. No; it was Gary and Julie Pearse who were catalyst to my own garden efforts getting off the ground. It was probably three, or four, years back that Gary first showed me some images of the hedgehogs that Julie was attracting to their back garden, less than a mile away from us. Julie had got rather passionate about these animals and started to colour mark their spines (with a small dab of nail varnish as I recall) so that she could monitor their numbers. Gary then showed me some trail-cam footage of these animals coming to their feeding station - I'm well impressed.

It wasn't, however, until lockdown started to impact upon my routine that I actually became serious about this, garden based, project. Searching the internet allowed me to find plans for a hedgehog house, which I then made out of scrap pallet wood obtained from Fuji. Whilst Cathy Newbury, over at Maxim's pet shop was able to supply the "Spike's Dinner" food, and metal dishes, needed for the feeding station. Hedgehogs have been a regular feature around the garden ever since. Right from the start it was clear that several individuals were visiting the feeding station over the course of a night and this remains true today. Exact numbers are difficult to gauge without going to the lengths of actually marking them? I'm doing my best to see if I can discover any features which will allow me to identify the individuals by using the camera kit. To my way of thinking it's an interesting side show, yet not vital, to the overall enjoyment of the venture. Just to have these creatures back in the garden is reward enough for the small effort involved in getting food and water ready for the coming night.

This brief dalliance with hedgehogs has really opened my eyes to the possibilities of what can be achieved with a modicum of effort. The internet is a wealth of information, via various passionate individuals and societies, all keen to promote the welfare of the UK's hedgehog population. Some excellent feeding advice is also on offer, with a major emphasis on mealworms and the devastating effects they can have upon the animals skeletal make up. Feeding mealworms is an absolute NO NO! Similarly, there is some other advice, which although not saying anything detrimental about the individual brands or products, suggests that anyone feeding these animals should use items that have been produced for the pet market, as they are governed by food standards, whereas the wildlife feed has no such standards in place. I can now vouch for this being a very cost effective way of ensuring the continued good health of my garden visitors. 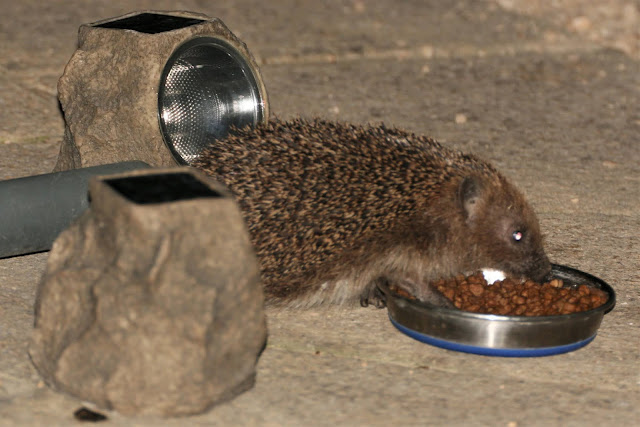 Having used, almost constantly, Spike's Dinner; only once have I had to purchase the Mr Johnson's alternative, I am now seeing the benefits of offering Tesco Kitten biscuits - the hedgehogs absolutely adore them. And here's the crux. Spike's Dinner = £9.49/1.3 kg the Tesco biscuits  75 p/500 grms, it really is a no brainer!