For only the second time, in almost twenty years, I recorded a Raven flying over the back garden as I was sat in my study on Boxing Day. That haunting, deep, resonant croaking call easily heard, even through the double glazing. I rushed outside to watch the bird disappear down towards St Lawrence College before a group of Carrion Crows started to mob it and forced it to seek refuge in the mature trees which surround the sports field. I grabbed a very poor record shot but, at a distance of 400 m plus, it wasn't much cop. Still I was really pleased, it's these type of encounters that make patch watching so rewarding.

Imagine my surprise when, on Saturday morning as I was getting out of the car, having been to the tip, the Raven was once again flying over the bungalow, calling continually. Unbelievable? I grabbed the camera from my study and went outside hoping that the bird would reappear. I could hear it calling on several occasions, yet it wasn't playing ball. With work early this morning, I was back home by 10.00 hrs and what would you know, same again. The Raven appeared over the garden and I was straight outside and, after some frustrating glimpses, was finally able to grab an image of the bird on the field just beyond the garden hedge. I hadn't had time to check the camera settings, hence the picture quality isn't brilliant, yet certainly good enough to confirm the id. 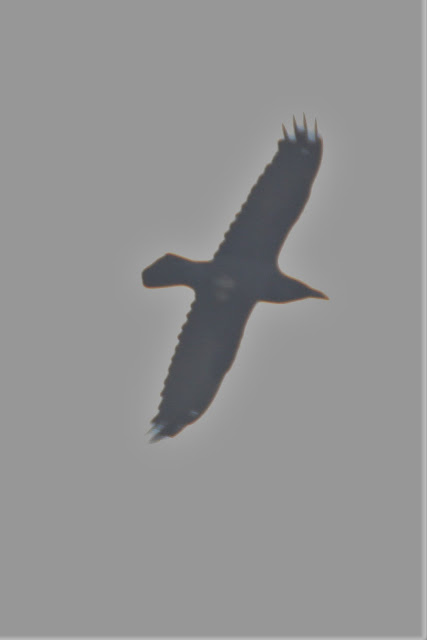 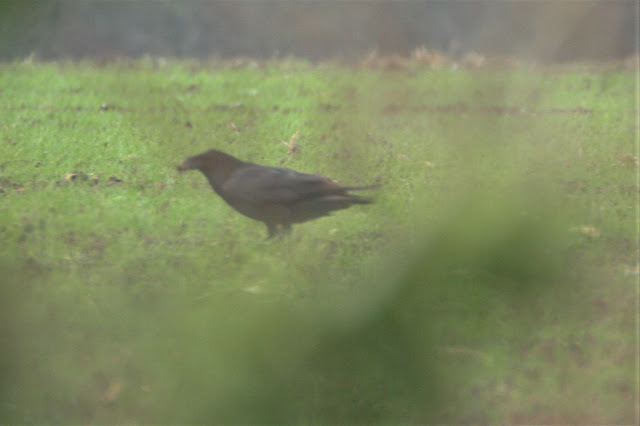 My first Kent Raven was twitched, when an individual was discovered feeding on a sheep carcass down near Dungeness in the late 1990's. Since that time, they have become an established and relatively widespread breeding species within the county boundaries. I'm unsure as to why, but Raven, and Great White Egret, remain a description species within the Kent OS recording area, yet I'm seeing both, regularly whilst out with the rods?

Whilst these massive crows might not be particularly pleasing on the eye, they certainly make up for it with their vocal repertoire and aerial acrobatics. Having an ability to stop me dead in my tracks whenever I am lucky enough to encounter them. Wonderful birds with something about them that ensures, no matter wherever I am, they give me an inner glow and draw a wry smile.

Quite what Newlands Farm offers this bird, I've no idea but there must be something and I'm hoping it hangs around a while and allows me to secure some better images. Even better, I'd love it to stay into the New Year as I've a garden photo challenge planned for 2020.
Posted by Dylan Wrathall at 14:06