Walking back from the local shop, yesterday afternoon, I was stopped in my tracks by a piercing "tsuu-weet" call emanating from a small ornamental birch tree in a front garden just feet away. The culprit was soon located and I spent a few moments watching the Chiffchaff, cos that's what it was, flitting about in the spindly branches. It was calling frequently and provided a nice reminder of how even the most mundane of locations can provide surprises, all that's required is being receptive to the sounds around you.

I will admit to being rather fond of Chiffchaffs they being one of the first species to proclaim the onset of Spring, yet also capable of brightening any winter's day when one is encountered around the local parks or gardens. Indeed, we had one over winter along Vine Close a couple of years back, Bev and I able to enjoy some nice sightings from within the comfort of the bungalow. Reading some of the latest posts at Not Quite Scilly I was reminded about a rather intriguing bird that John Holyer discovered within a wintering flock, which also contained a Yellow-browed Warbler, down at Stodmarsh in late 2003.

The most striking feature of this individual was how pale it appeared in comparison to the familiar "collybita" birds. Obviously Siberian Chiffchaff was quickly offered as an id option and, along with several other local birders, I spent many days with this individual attempting to figure out the conundrum it posed. What I really needed was to hear it call and perseverance paid off when I finally heard the bird utter that "typical" tsuu-weet contact call, so Siberian it wasn't! Didn't stop an awful lot of birders turning up and ticking that box, as I got told on several occasions, "it's obviously a Sibe!" With that Yellow-browed as an additional incentive to visit the reserve, this bird was seen by a good number of experienced "twitchers".

I had been very fortunate to find a "cast iron" Siberian Chiffchaff out on The Ash Levels way back in 1994 and that piercing mono-syllabic call note is unique. Certainly, in no way can it be mistaken for that of our nominate population? So I had to conclude that the Stodmarsh bird was an "abietinus" individual from the North/North Eastern European population. Now; whilst I'm no longer involved, therefore bothered by what's happening, in Kent (UK) birding I do keep an eye on what's being reported because it might help me whilst I'm out with the rods? An influx of Short-eared Owls, Cattle Egrets or Bee-eaters, at least I'm aware of the situation therefore prepared for such a sighting should I be so lucky?
Racial variation is something which I became fascinated by whilst in my final birding years. It didn't matter if I was looking at gulls, cormorants, Chiffchaffs or Peregrines, there was so much more to looking at birds because of these nuances. I've made reference to the fact that "experienced twitchers" had ticked the Stodmarsh bird as a Siberian Chiff, purely because twitchers ain't birders, just as carp anglers ain't speccy hunters! I do enjoy "Devil's Advocate" purely because I now realise how unimportant any of this stuff is. If you really wanted to see a Sibe Chiff, then away you go, exactly the same as those guys who catch a mid-thirty but hadn't weighed it. Why should it bother me how others gain pleasure from these pointless, but undoubtedly enjoyable, hobbies?

That Stodmarsh encounter has lead me to keep an eye on the news pages of Birdguides and, as yet, I have never seen a report of an "abietinus" Chiffchaff but, in contrast, Siberian Chiffchaff regularly appear in the rare bird news. How many of these reports are erroneous? Not that it really matters, certainly not to me!

The Chiffchaff puzzle is one that has provided an immense amount of scope for pushing myself as an observer. The racial variation v's species debate is more about science than field observation, but I will continue to stick to my guns and make decisions based upon what I can see through my binoculars - not down the lens of a microscope! 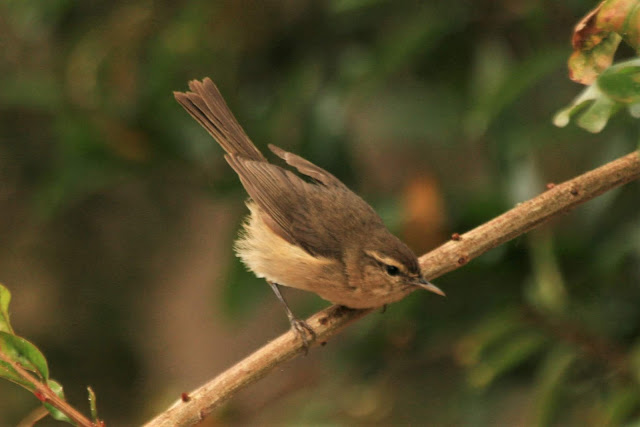 Time spent on holiday, Tenerife and Grand Canaria, has allowed me the chance to spend a prolonged period watching the Canary Island Chiffchaff. Vocally it is un-mistakable - one turns up in a Devon SF - silent what would the "twitchers" make of that?