Embarrassing farce and a new distraction

So Bozo has made it to the dispatch box and had his first exchanges with Corbyn. What a display of utter incompetence. Quite what the rest of the world thinks of the "Mother of all Parliaments" is up for debate. That "The Speaker", John Bercow, was called into action on so many occasions just highlighted the complete meltdown of our political system and did nothing to dispel the view that t/v is fast turning our government into a reality show. Bercow is the ring master and the MP's provide the entertainment. Pure circus - Whitehall Farce! Boris can spout all the populist crap that he likes - getting it done is what matters and, thus far, nothing has changed! So OK, he's only been in office for a couple of days but, talk is cheap, let's see if he can deliver? Oh no! They've all gone on holiday for six weeks, such a stressful way to earn a living, Theresa May went off watching cricket - wish I had a job like that, I only get five weeks a year and that's more than many others at the grass roots! How are we to trust any of these elitist clowns when they are so far detached from the reality of earning a decent income in the UK in 2019? "Do as I say, not as I do" springs to mind.

On Thursday I survived the ridiculous temperatures,working inside the air conditioned manufacturing facility of Fujifilm SIS, whilst the rest of Thanet was cooking! My shift ended at 14.00 hrs and it was like walking off a plane in a Greek airport - the heat just overwhelmed you! 34C is what where the thermometer peaked in Dumpton, yet it was four degrees hotter in Cambridgeshire, mad times! With heat like this, thunderstorms are to be expected and I had set myself a challenge; could I get a photo of lightning? I've seen some stunning images from around the UK, displayed on the BBC Weather-watchers pages. Thinking that I'd like to have a go it was Youtube that provided the basic lessons for my first attempt. 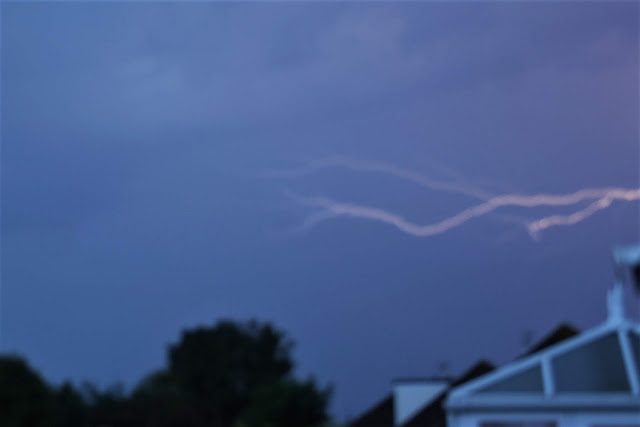 I didn't expect it to be an easy project, but enjoyed this first exploration, non the less. The ancient EOS 350 might be a limiting factor, but it's just a bit of fun, not why I own a camera.