Ended on a high

Well that's my close season project completed with twelve days to spare. One hundred carp, caught off the surface, from Homersham Lake at Marshside. I left home just before 04.00 hrs and was at the fishery within thirty minutes. A perfect, still, bright dawn, the sun rising magnificently over the eastern horizon behind me. I had a quick recce, before I returned to the van and unloaded my gear. I introduced a few floaters in pegs three, four and five, watching the water as I threaded the line through the rings of the Mk IV Avon. Peg five looked the most promising and I moved the barrow to this swim and prepared my net and un-hooking mat in readiness.
By now it was fast approaching 05.00 hrs and I cast my first baited hook amongst the floating mixers. Second cast and I'm in, thus job done. My one hundredth carp from the fishery! I'd allowed myself a two hour time slot, so carried on fishing, and was to enjoy regular action right through to 07.00 hrs when I packed up and went home for a much needed kip. Work at 14.00 hrs.
I ended the session with ten fish hooked, nine landed, which included the heaviest fish I've caught from this venue. A beautiful Common, of 15 lbs 6 oz, was guided over the net at around 06.30 hrs and I went through the self-take ritual, but using the EOS not my favoured Finepix. The results are perfectly acceptable as record shots, of my achievement, but lack the sharpness that the Fuji camera produces under these same conditions. 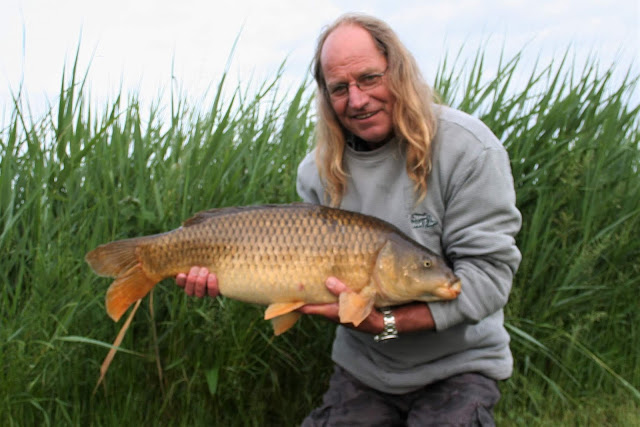 Great couple of hours made even better by a flyover Bee-eater (called three times), a Common Tern fishing the lake and the constant accompaniment of singing Whitethroat and Reed Warblers. Back in bed well before 08.30 hrs. I'm now sitting in the study looking at the steady rain falling on the garden. Crazy how quickly conditions change in my little part of East Kent!
Just one other observation, although it will be lost on the vast majority of carp anglers, I fear? There were two bivvies set up on the north bank, thus a couple of guys had done the night I assume? I watched the dawn, caught nine fish, and experienced the joys of being outside as the countryside comes alive. Those two were still slumbering when I packed up, not a sound from their alarms all the time I was at the fishery. Now it is certainly not my place to say how others enjoy their angling but, from my perspective, I was fishing, they were just camping. Still, it takes all sorts - eh?
Posted by Dylan Wrathall at 11:55