Life is a very complex mixture at present. As I alluded to, in a previous offering, blogging isn't a priority during this present situation but I'm confident normality will be resumed in the, not too distant, future. Therefore I apologise for my lack of output, but will have to get through this, with the massive support of Bev, my family and friends, before blogging can take centre stage once more.
I've still managed to get out with the rods, on the odd occasion, although my results have been erratic, to say the least. Birds have featured in my daily routine, the first returning Lesser Black-backed Gull was at the Pyson's Road colony 21st Feb and there have been a few Buzzards spotted as they begin the Spring migration over Thanet. The crazy weather ensured my butterfly list got underway on 23rd Feb, when Bev and I encountered three Brimstones whilst driving between home and Canterbury, a Small Tortoiseshell added just two days later as I walked to the Post Office. Last week of February and the temperatures hitting 18C (on Thanet) - yet that fake-tanned, clown still argues against "climate change" being a reality!

With less than a fortnight to go, before the "traditional" close season, the perch campaign continues to dominate my angling effort as I've decided that a change of direction is due on that watershed date. Out, this morning, before 05.00 hrs, with two rods fishing by 06.20 hrs, I was hopeful of some action given the weather forecast.  Overnight temps no lower than 8C, with heavy cloud cover prevailing right through to the mid-afternoon - bang on ! 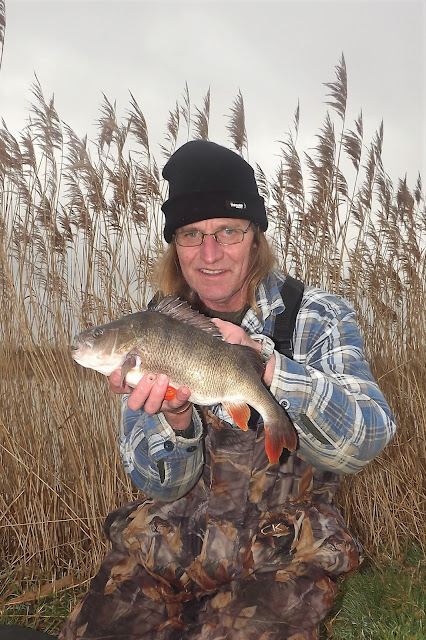 Using King Prawns, soaked in Predator Plus, I got indications almost straight away. However; I reckon my hooks were made for Greenpeace, I dropped a powerful fish then bumped a second, within the first forty minutes. I eventually landed a lovely perch, of 2 lbs 4 oz, then endured a four hour spell without further fish landed, although a couple of carp made the alarms scream before dropping the bait. Just before I packed up I missed the "un-missable" bite; much to the amusement of Micheal who was fishing in a swim opposite me. Two Common Buzzards were feeding/hunting around the adjacent paddocks and a decent flock (charm) of Goldfinches was buzzing around the field margins. The most obvious birds were Cormorants, almost a constant stream of groups heading south, certainly in excess of 1,500 birds before 09.20 hrs. I think that they were moving out of the Thames Estuary and cutting the corner, thus avoiding Thanet, rather than heading back to the Stour Valley roost site. For only the second time, in nine years, I was visited by the EA bailiffs to check my rod license and a very interesting exchange took place. The guys speaking about the paucity of anglers who are encountered on the local rivers, the commercial still waters being their most productive haunts for encountering illegal anglers. £27 per year to remain legitimate or £1,000 fine if you can't be arsed - a no brainer if you have one?
The day was further enhanced by the meeting of Ian Williams, a guy who had left a comment on one of my posts, asking for some advice about fishing at Marshside. It's always rather humbling when a complete stranger introduces themselves due to my offerings posted into cyber space, via the blog.
Posted by Dylan Wrathall at 19:07