The funeral passed as smoothly as we could have wished. Friends and family gathering at Barham Crematorium to celebrate the life of Ron Bunclark. The service was conducted by Patricia Stewart, a Life Celebrant, and provided a fitting finale. It is the first service, of this type, I have attended and must say that it certainly impressed me with the simplicity of format and the happiness that was purveyed by the words and music used during the proceedings. As religion played no part in his life, it seemed right that it wasn't required for this final act. A post funeral gathering took place at The Two Sawyers, at Woolage Green, and was a very enjoyable social. Many memories being shared of the man whose passing had been catalyst to the event, everyone agreeing that it had been a fitting send off. 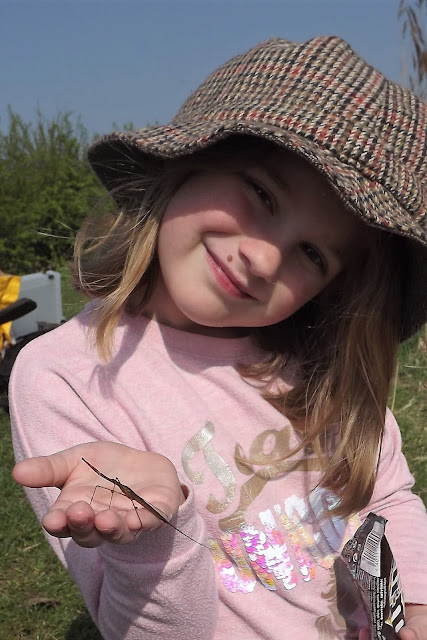 Emily stayed with us, after the funeral, and it was my task to entertain her on Saturday. She said she wanted to go fishing, although her enthusiasm didn't last long once we'd got set up. There was far more fun to be had by chasing after Marsh Frogs with the landing net! We managed to get up close with an individual, after catching it with the net, and it was whilst we were creeping about that I discovered a Water Stick Insect swimming by the reed line. Quickly secured in an empty ice cream tub before Emily posed with it for the camera. Unbelievably, this is my first encounter with this widespread and common insect; even more puzzling given the amount of time I spend beside the water whilst engaged in my angling.

I managed to get back to the water, much later in the day, bagging three more scamps using small cubes of wholemeal bread and a controller float. Great fun on light gear. 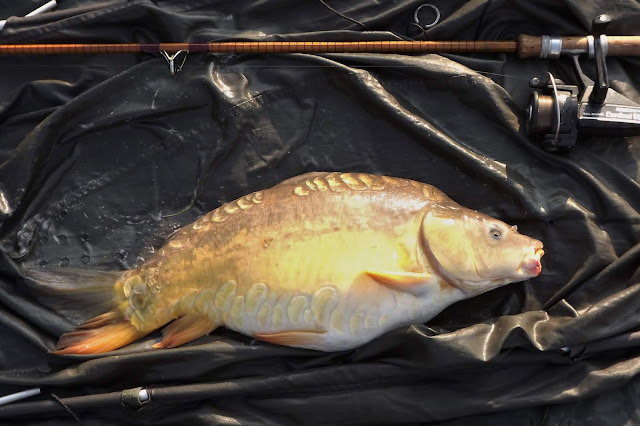