Bev and I have been overwhelmed by the support offered during this difficult period - we are blown away with the kindness and sympathy we've received. With Ron's funeral arranged for Friday 29th March, it's now all about dotting I's and crossing T's as the detail is confirmed. This morning we, along with Bev's mum, met Patricia Stewart, the Life Celebrant, who will be conducting the ceremony. It was a rather strange situation for me, as both my parents were devout Christians and their religious beliefs ensured that their funerals followed a very traditional template. That the God Squad have never figured in Bev's family - period; it is quite understandable that the "Humanist-type" service is best suited for this final act. Patricia provided great comfort as she guided us through the service structure and sought to get to grips with the life and times of Ronald Bunclark.
With all this going on, work to be done, and so many other side-shows, it's hardly surprising that fishing has been on the back burner. I'd managed a couple of hours, on Thursday, landing six small carp using the very simple tactic of free-lined floating crust. I got out again, this afternoon, and continued with this method, although a brisk Easterly did nothing to aid my chances. 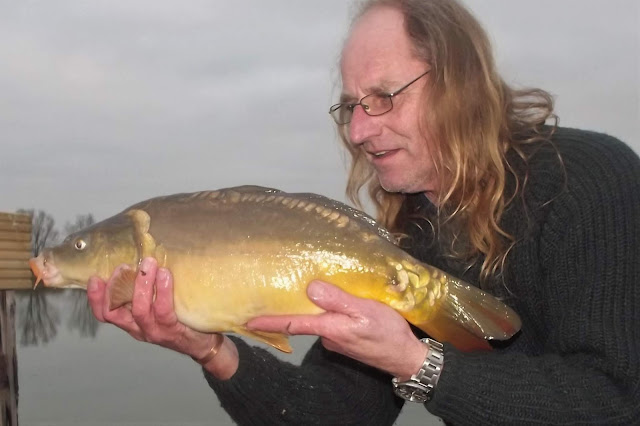 Today I used an ESP 15g controller, which allowed me to get my bait much further out into the pond, yet stuck with bread as my hook bait choice. A scattering of dog biscuits, courtesy of the catapult, and my bait cast into the midst of these floating freebies. It doesn't get simpler than this, does it? Three more carp to the landing net, but so many more missed, there is still much fine tuning required for me to get the maximum return for the effort involved. I've been using the Mk IV Avon with either the Allcock's Match Aerial or an ABU Cardinal 66X, both fitted with 4.5 lbs b.s. line and a size 6 Korda "widegape" (barbless) hook.

Bottom line is that it is brilliant fun catching fish using the tactics and tackle I'm employing. Just what's required during the present situation.
Posted by Dylan Wrathall at 21:19