A morning to savour

Bev and I, along with Madeline, our neighbour, attended the funeral of Hugh Mathews - the husband of Kathy, thus another member of the Vine Close massive. Margate Crematorium provided a splendid send off, for a really nice guy who had impacted positively upon so many during his time on this earth. There was a bit of God Squad stuff, but generally it was a celebration of the memories that Hugh has left us all with. After the ceremony there was a very low key gathering, as Kathy wanted, and we slipped away after a bite to eat and headed back home, leaving the family to come to terms with their loss.
Sneaky, or what? I could get out fishing whilst Bev went out with her brother and parents for their regular Friday away-day. I'd already got the bait from the freezer, prior to leaving for work at 05.30 hrs. What could possibly go wrong?  Are you kidding! EVERYTHING. Bev's father had been rushed into hospital, requiring a couple of blood transfusions, but no-one had thought to let us know where or when! Panic on, Bev and Gary (her brother) phoned around the various hospitals before discovering that Ron was in the QEQM Margate. Gary arrived from Whitstable, and collected Bev, en route to the hospital. I was told that I could go fishing, if I wished. Funnily enough my head wasn't capable of rational thought, let alone focus, and I said that I'd have an early night and get out in the morning, depending upon what  the outcome of the hospital experience.
Fortunately, Ron was discharged and returned to Herne Bay with Gary, the future being far from assured, but there are plans afoot to get social services far more involved with the, day to day, care of Ron and Denise. The alarm sounded at 03.45 hrs and so I was on my way, the weather forecast being overcast with a brisk easterly wind. Really? How much computer wizardry have the Met Office got and still they can't even get close to the reality of East Kent micro-climate quirks. The pre-dawn sky was illuminated by the waning moon and littered with countless stars. I could make out Orion's belt, through some wispy clouds, and offered up a few thoughts to the angling gods as I prepared to make my first cast into the drain. Two rods out, a small scattering of freebies on two spots, I sat back to enjoy the dawn.
A Barn Owl floated past and a pair of Little Owls called out in the darkness, it was classic flatland autumnal fare. The right hand rod couldn't have been out more than 45 minutes when the Siren R3 burst into life and my centre-pin spun as an unseen fish powered off with my bait. I don't think the fish knew what was going on because I had it in the landing net within a minute. Only then did it really start to play up. Too late old mate - game over! I knew it was a good fish when I landed it, but it was only once the sun rose that I could fully appreciate the beauty of my capture. A wondrous, wild, common carp, all 22 lbs 2 oz of it. It encapsulates everything I seek from my time out on the marsh - I was in adrenaline heaven. I spent the best part of two hours attempting to contact Benno, as I wanted to share the joy and needed some photos! Nothing doing, but that's Benno's story, so I had to revert to the self-take technology I have at my disposal. Task completed, although I feel that I've not achieved justice for the magnificent carp that I'd been privileged to catch. 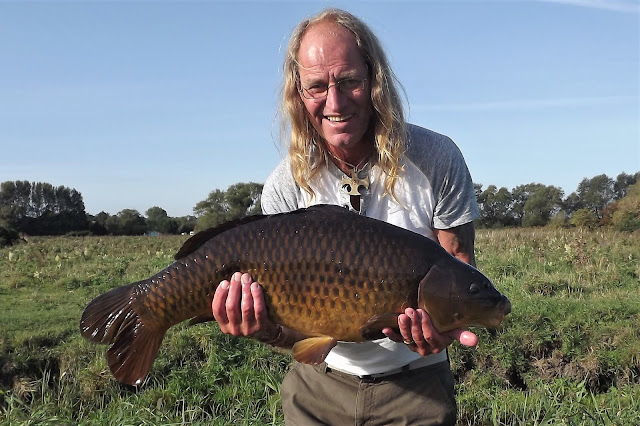 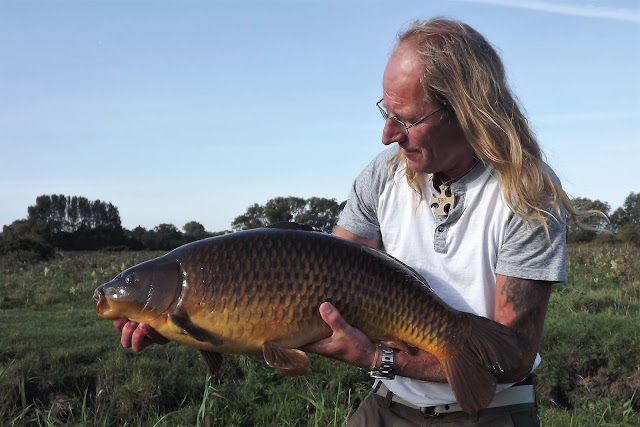 I packed up before 09.00 hrs, photos done, and made my way back to the van encountering another angler on the way. Just like me he seeks the thrill of these wild places and the wondrous inhabitants of the crystal clear water. He has a very positive outlook on the world, despite his disability, and uses fishing as a therapy to everyday life. It was a joy to spend a little time in his company - he knows who he is. We will bump into each other again, of that I'm sure. Only one Beaver today, but plenty of birdie action included 4 Mistle Thrush, 2 Common Buzzard, 2 Sparrowhawk, Meadow Pipit, Goldfinch, Linnet, several Kingfishers, Golden Plover, Lapwing and good numbers of Stock Doves. All round it was a fantastic session.
Posted by Dylan Wrathall at 17:36