Pieces of a puzzle

I've managed to get four, after work, sessions in this week - thanks Bev! I've not blanked on any occasion, although my results haven't been that sparkling. Lots of carp/F1 hybrids picking up my prawn hook baits - more than a few lost using this light tackle. Perch have been my target species and I've caught them on three, of the four, outings - so not too bad? I even managed to tempt an odd tench, from the larger club venue (very unusual) but the bream have been a real pest. These are proper "snotters", 2 lbs at best and covered in thick slimy mucus which clings to anything it touches and stinks like nothing else (except eel slime - perhaps?)

I don't like to use the term "nuisance" fish, but these bream certainly come close to it. However, they do provide action when I'm awaiting the attentions of perch and create far less disturbance in my swim than those pesky carp! A bream, once hooked, simply waves the white flag and floats across the surface straight into the awaiting net; so much easier than feisty little scamps who's sole purpose is to create as much havoc as possible whilst attempting to avoid a visit to the unhooking mat. 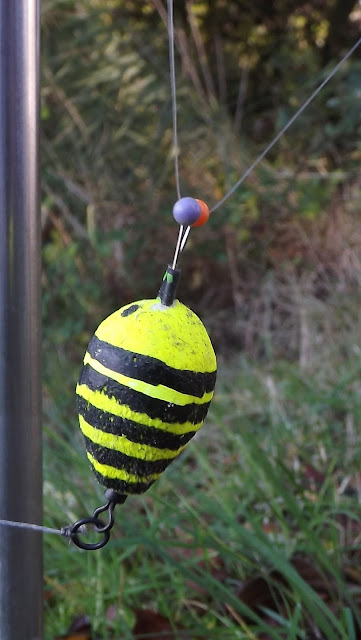 I've made a couple of light weight bobbins and given them the "home made" treatment - it keeps away the fashionistas - they couldn't possibly be seen talking to a Noddy! I call them Jasper and Sid, because I can, and they are deliberately wasp coloured, so as to be easily confused with the Nash tackle item which also goes by the name of The Wasp Indicator!

Thus far swims have been chosen for their proximity to cover, be that overhanging branches, reed beds or lily pads. Simply somewhere from which perch can mount an attack on any prey item that swims past. The depth of these swims hasn't yet been a consideration but, as the temperatures start to fall away, deeper areas will be targeted. Bait choice has been restricted to prawns, which I am fishing on  a hair rig set up tied with 5 lbs mono and using a size 11 Barbel Maxx hook. This has seen an improvement in my catch rate, and I'm pleased with the hook holds not being in the throats of these fish. Next stage in the plan is to start to use lob worms, so a whole new set of problems to overcome.
It's great fun learning by trial and error, my successes have far more meaning when they are a result of a tweak or idea that has been due to an angling situation which has had me stumped.