With the passing of the seasons, so the visitors to our garden feeding station change in accordance. Over the years we have been extraordinarily fortunate to have attracted some wonderful birds into our garden, purely because of our provision of food and water (for drinking and/or bathing). However, our geographic position, on The Isle of Thanet,  has also played a major part, thus birds like Ring Ouzel, Fieldfare, Black & Common Redstart, Reed Warbler, Ortolan Bunting, Waxwing, Tree Sparrow and Dartford Warbler have also been recorded "in" the garden, yet nothing to do with sunflower hearts, fat balls or bird baths. 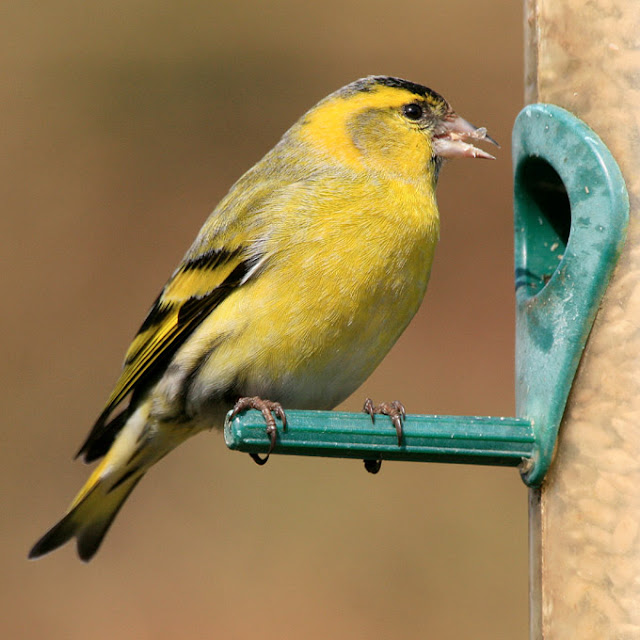 A conversation with one of the guys at work, as I was attempting to explain my excitement about the recent Sparrowhawk/Collared Dove episode, actually set this thought process in motion. Over the years I've been privileged to have been able to photographed many birds around the feeding station. The vast majority of these images are of the very ordinary species, as expected in a Thanet garden, any garden?, but there have been some nice exceptions. I think that the image of a male Siskin, on our sunflower heart feeder, is the one of which I am most happy and sets the bench mark by which others are measured.

I was staring out of the kitchen doorway, big lens to hand, via the full length, double-glazed, panel in the back door; simply watching the House Sparrows that are a constant feature of the feeding station. Bev asked "What are you doing?" - which isn't an unreasonable question. My reply went along the lines of " I am waiting for a rare bird to turn up" I had no major reason to expect such an occurrence, it was more wishful thinking based upon the fact that our garden has attracted so many birds over the past seventeen years, surely it has to happen sooner or later? Every year, without fail, rare birds are discovered in urban gardens, attracted by the provision of food. My only, UK, Slate - coloured Junco was discovered by Dave Bunney, in his Dungeness garden, feeding on seed that he had deliberately placed for the wild  birds. Will such an event ever happen in our back garden? Only by looking out of the back door window will I ever have a chance of knowing the answer.