Catch of the day

Another early start at the club fishery resulted in a mixed bag of a perch, two bream and three carp - none of them worthy of weighing, that's for sure. The sun shone brilliantly from a clear blue sky and, as such, perch fishing was a non starter. A couple of small commons fell to free-lined floating crust, but that was it. I packed my kit and made my way towards the car park only to be stopped in my tracks by a small Grass Snake slithering across the path. I quickly made a grab for it before attempting to locate my camera from within my tackle bag. 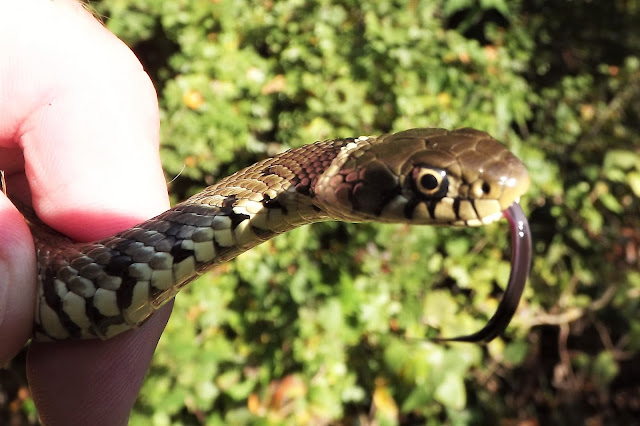 It took a bit of fiddling around, but I managed to get a few shots of this fabulous little reptile. What a shame that none of the grandchildren were around to see it. No monster, around 18 " being my guess, it made the morning that much more enjoyable. The only other thing of note was the fact that a few Siskin have now joined the Goldfinches feeding on the island Alders.