Bev's hurt her back and, needing to care for Harry on Tuesday, I took an emergency day off - a major plus point of working for Fujifilm - no problem, no guilt trip mentality involved. You need the day off - have it! So grand-dad spent the majority of his day entertaining his grand-son. We went to two parks/playgrounds, stroked the horses, watched the pigs, smelt the flowers and wandered through Rod & Rex's collection of WW2 stuff - Spitfires, tanks and assorted military hardware - it's a pretty weird place, but we enjoyed it. Just to put the cherry on the cake, we then popped into The Coach & Horses, for a well deserved chocolate ice-cream, a pint of the finest Stella Artois, and a check up on the dress code for Mike & Penny's 25th anniversary bash? Tough life being a grand-dad.
Back to the bungalow by mid-afternoon, we sorted out a bite to eat and some You-tube entertainment before Debbie (Bev's daughter) came to collect her youngest.
A quick check with Bev - ensuring everything was OK and I'm off out down to the local club water. Could I catch a carp in two and a half hours? The answer was yes, but I struggled for it, missing four good chances before eventually setting the hook into the lip of a lively little scamp common. There was a very positive lesson to be had from my time at the fishery, however, I spent the vast majority of my time watching these small carp and their reaction to my floating freebies and hook baits. I was fishing in a small secluded bay in the NE corner of the venue. What wind there had been had died away and the surface remained glassy calm, allowing me a great insight into the behavior of these feeding  fish. It was a real eye-opener to see the violent reaction when coming across any bread. Fish would physically bolt away from the bait, even when it was free floating. In open water; attaching a hook and line ensured total failure, despite the fish being happy to feed from the surface on other offerings. The only situation where these fish felt confident to accept bread was in the margins and/or snags. My only success came by utilizing an old trick from a by-gone era. I cast my free-lined cube of crust under an overhanging willow, ensuring the line had passed over a thin branch, en route. This allowed me to tighten down, ensuring no line was in/on the water, thus present a bait without any obvious signs of a hook being involved. 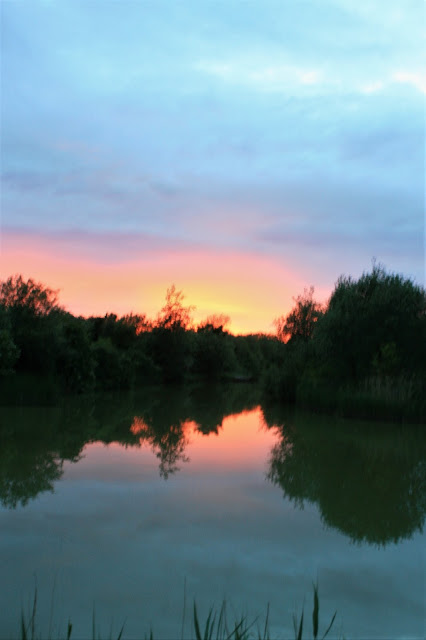 I stayed until dusk, the fish activity increasing as the light fell away. Much to my surprise, many of the fish involved were Ide, not the carp for which I'd introduced the floating cat biscuit freebies. It was a fabulous evening, a Turtle Dove purred from adjacent farmland, a Cuckoo perched atop many of the fishery high-spots, calling constantly. There were numerous Reed Warblers, a male Reed Bunting, Lesser Whitethroat, Blackcap, Chiffchaff and Cetti's Warbler in the immediate vicinity. I enjoyed the session immensely, despite the lack of fish to the net. The sun set was a magnificent affair - all reds, gold and shades of yellows in a deep blue surround; my camera failing to capture the splendour of the moment - sadly!
Posted by Dylan Wrathall at 18:10