Does anyone remember sunshine?

On the fateful day of "Live Aid 1985" mid way through Stairway to Heaven; Robert Plant asked the question "Does anyone remember laughter?" The quote is as fresh in my memory as the day it was delivered - I still hurt as my youngest brother was there and I wasn't! A bit like missing the Beatles, Jimmy Greaves or George Best; when they've gone - they've gone, and any amount of money will not replace them. Looking out of the kitchen window, today, reminded me of that quote, but with sunshine as the subject. Man; this current weather pattern is depressing! It doesn't matter if you are an "outdoors" person, or not, seeing the sun always makes the day more bearable. People you meet are happier, of a more pleasant disposition, when the sky is blue and the big golden orb is viewable, casting shadows across familiar surroundings.
As an individual who likes to spend as much time outside as is possible, these present conditions are driving me nuts. A Christmas holiday period of 10 days - I've managed to get out once, so far. OK, I'll admit that family commitments have ruled out certain dates, but weather has had a far bigger role in restricting my activities. So in an effort to redress this imbalance I have been scouring the archives for some memories of 2012 when the sun did, indeed, shine. 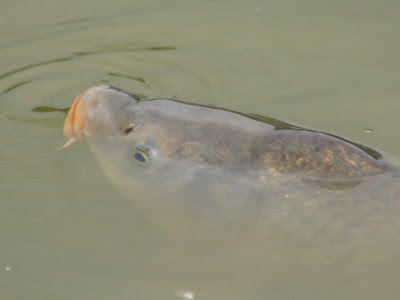 My summer months were spent, when time allowed, chasing the "wildies" (wild carp) of the wonderful Long Shaw Farm complex of "carp puddles". Not everyone's idea of fishing, or even carp fishing, these lakes do allow for some hectic sport if you approach the fish with the right attitude. Firstly - you ain't gonna catch a big fish! Secondly - they are very easy to catch, so don't over complicate things. And thirdly - enjoy these fish for what they are - hard fighting, easy to catch, good looking, bundles of energy. For £10/day it is possible to use two rods at the venue where one rod is more than enough if you are prepared to work a little. Carp purists will recoil at the thought of "floater fishing" for these fish. A guy at a PAC meeting called them "freshwater rats" - such is the disdain to which some anglers have come to look upon these commercial fisheries. Yet a single rod, a 1970's Match Aeriel centre-pin (Fred Crouch copy) purely my choice, 7lbs b.s. line, a size 8 Drennan hook and a cube of bread crust is all that is required to enjoy a hectic day of action with these fantastic fish. My local shop will sell you two boxes of cat biscuits (flavoured with Herring, Tuna and Pilchard) for less than £2 - over 2,000 free offerings into which you can cast your baited hook - bloody simple! 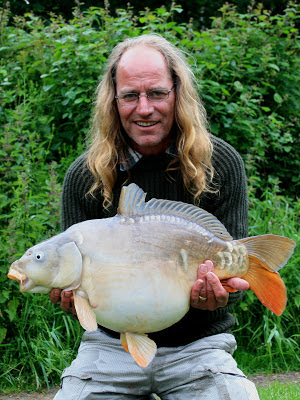 Low to mid-doubles are what is a realistic target, twenties are a possibility, although I have to say that I didn't (personally) see anything of that size during my trips. I did take my gear to other lakes and enjoy some success using very similar tactics. I took this "Italian strain mirror" from a small water in East Sussex. A superb battle on the light gear, it is one of my angling highlights of 2012. Benno, Luke and Sick-note continued to chase carp around the Kent countryside, yet none of them caught anything spectacular. Benno had a "near miss" with a 19lbs 12oz Common, but that was about it! Kevin Maddocks blew the "lid" clean off of the carp fishing "inner circle" when he published "Carp Fever" way back in 1981. Rod Hutchinson, Dick Walker and Jack Hilton had offered glimpses into the "finer art" Kevin simply revealed all - a bit like the keys to the Bank of England after being given one number to the combination lock! Carp Fever actually produced exactly that - it spawned an industry that has elevated carp angling out of the "minority pursuit" league into the upper echelons of a mainstream hobby. The number of individuals now actively engaged in carp fishing has ensured that there are T/V channels dedicated to nothing else but Carp fishing! I have absolutely no doubt that Kevin (we crossed swords on numerous occasions) has come out of this scenario very well. Benno and I have enjoyed some fantastic sessions during the summer, with plenty of fish being landed - "zig bugs" being a particularly successful strategy (I used home-made zig bugs and they are awesome) 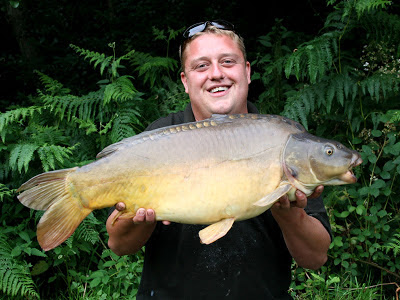 There are so many other stories from the summer of 2012 - we caught stacks of fish; mainly Carp but there were good numbers of decent Chub and Perch that ensured that our angling wasn't wasted effort. However, it wasn't all about fish, there were plenty of other subjects to keep my lenses busy. I got som nice images of birds of prey, during the year - yet there is one photo that I am happy with that encapsulates all that I'm about at present. A pair of "coupled" White-legged Damselflies - the "Mutt's Nuts!" 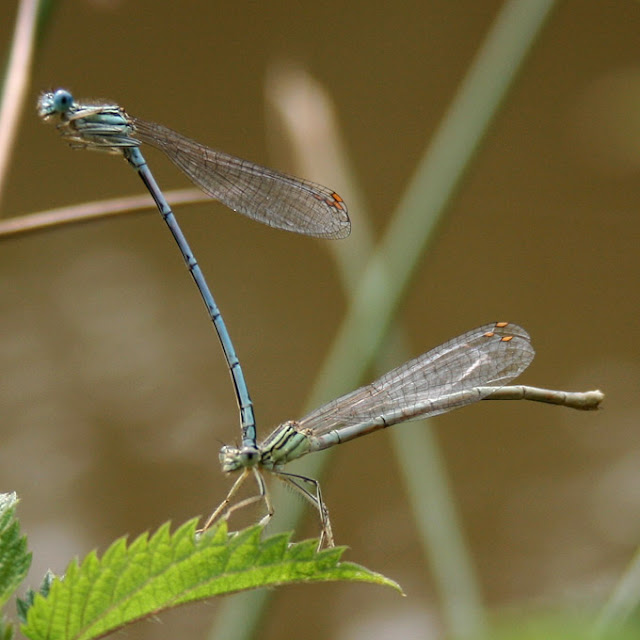