This past couple of days I've been really poorly. Nothing to do with the pandemic, food poisoning would be a far more likely cause. Either way, I haven't felt like doing much more than sleeping and visiting the loo - how very pleasant. With my laptop keeping me abreast of the latest developments in the weirdest Premier League games ever played; this afternoon,  I've been going back through old files looking at stuff that has been long forgotten.  It was September 2015, our first holiday on Kefalonia, and I'd had an absolute blast whilst wandering the stunning countryside which surrounds Lourdas. I returned home with more than enough material to produce a series of posts and the photo file got sent to my external hard drive where it has languished ever since. Until today, that is. I was clicking through the several hundreds of images when I came across a series of a warbler in the olive grove, just along the road from the Saoulas Studios which is always our base whenever we're on the island. My first thoughts were why hadn't I made any effort to id the bird? "Couldn't be arsed" being the case at the time, plus copious amounts of Mythos and so much more to enjoy whilst on holiday, thus it simply avoided any scrutiny. The more I looked at the images, the more drawn I was to the fact that it might be something worthy of further research and I've spent a very enjoyable, if interrupted, afternoon grilling this individual. 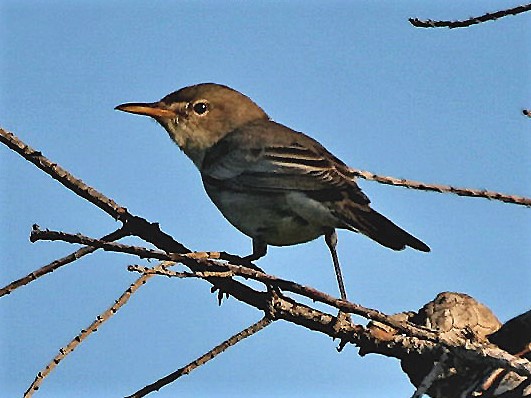 This is why you visit olive groves in Greece. Olive Tree Warbler
I'm sure that I'm not unique in having difficulty associating familiar birds with completely out of context habitats. I remember, in 1993, finding myself questioning the id of Tree Sparrows, migrating along the cliff-top at St. Margaret's Bay, because my only experiences were from the Hertfordshire countryside and the Ashridge Estate. They were simply not on my radar as a coastal migrant, thus my brain refused to recognise a call, of which I was completely familiar, because of the habitat they were encountered. Over the years, Greek olive groves have provided me with some exceptional birding experiences and I've enjoyed, immensely, the testing conditions of cloudless blue skies and the dappled mix of light and shade created by the foliage of these trees. Prior to 2011, and my rediscovery of specimen hunting, I'd have nailed the id of this bird on the day, using the back of the camera to assist my efforts. 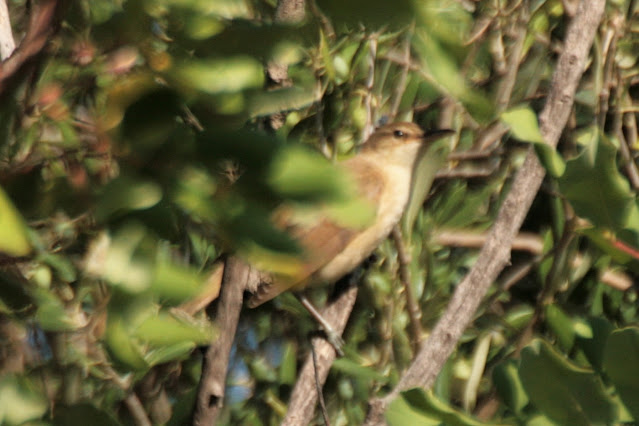 So what have I got to go on? The above image is the best I managed when I initially found the bird. Obviously hindered by the dense vegetation, the pale tipped primaries, leg colour and that very strong supercilium might be of assistance? This individual was never settled, moving steadily through the foliage searching for food, certainly not overly worried about my presence. 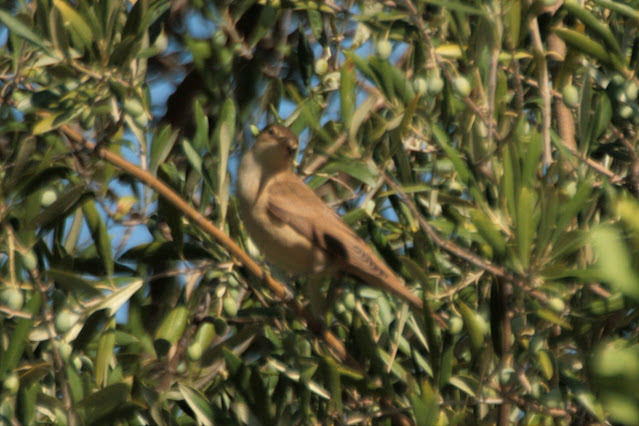 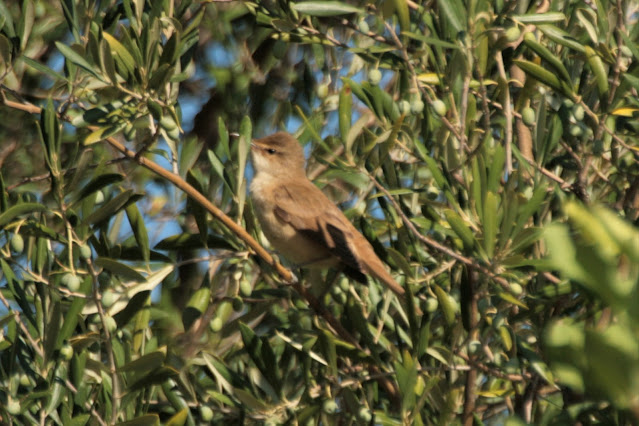 I managed a series of twelve images in total before it was lost from view. The two images above allow an appreciation of the rusty tone to the brown plumage and a better view of the long primary projection, in the top image, and the substantial beak proportions, in the lower one. 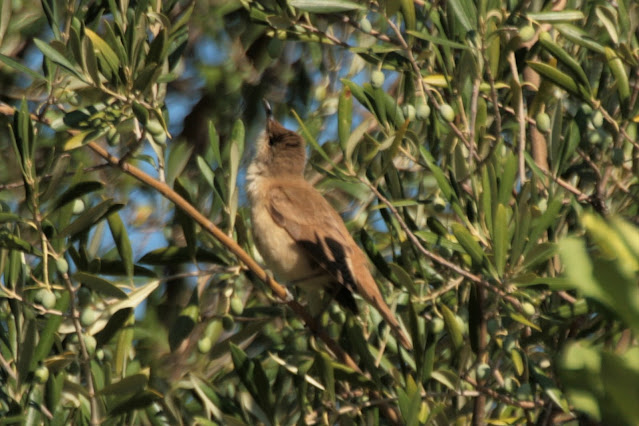 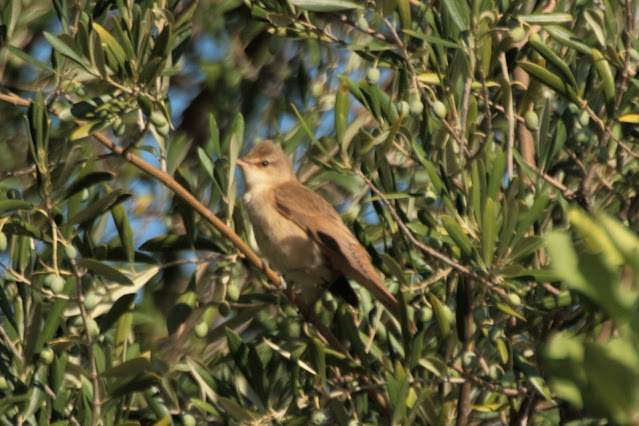 So there you have it. My mystery bird is nothing more exciting than a Great Reed Warbler. I've seen loads during my holiday travels, even a few in the UK, yet didn't think of it when I was actually standing in that olive grove, nor when initially looking at the photos again today. Why? A mental block, my brain incapable of spotting the obvious, purely because of the habitat. I must say that I've rather enjoyed this little exercise and might see what else I can find tucked away in the hard drive, awaiting a second look?
Posted by Dylan Wrathall at 20:39