For those visitors who are at a loss, as to the relevance of my choice of post title, might I suggest a tap on Google search, entering the code 10 CC ? It will all become obvious after such an enquiry has been made. To the rest of us "old'ns" no such explanation is required and I'll continue with this offering. Benno and I returned for another session down on the tidal Stour, Sunday, yet still feel we're clutching at straws with our approach and tactics. The only fish, a very small bream, came to my, quiver-tipped, offering of bread flake. We gave it a good five hours and continue to exchange ideas about how we are to progress the challenge. Understanding the tides is but a, very, small aspect in a much bigger picture.  Bait presentation and bite indication have already proven to be areas where there is much room for improvement. There will be many more flaws to iron out before we finish this caper, that's for sure. It wasn't a wasted effort, by any means, and I managed to grab a couple of shots of the huge adult Beaver that is present along this section of the river. Despite steady boat traffic, paddle boards and kayak activity, the first sighting was at 18.10 hrs, in blazing sunshine, as it came powering down the centre of the river. I obtained my photo, some ninety minutes later, as it headed back upstream, swimming much closer to the opposite bank, still in broad daylight. 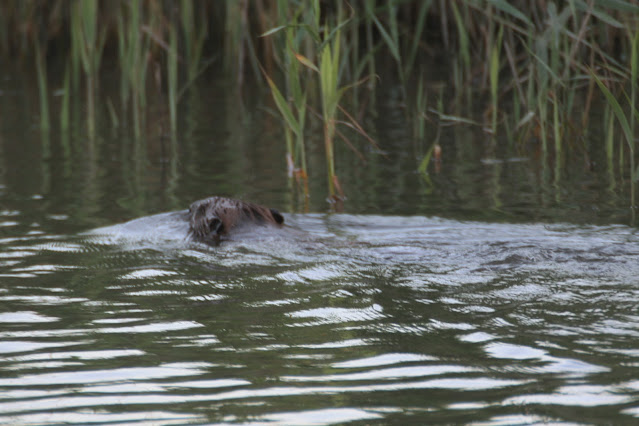 So to the next bit of this rambling concoction. Revisiting old photo files to see what might have been overlooked?  Well; this has been rather an eye opening journey with some very interesting lessons for me. Birds which had been dismissed as wheatears, now subjected to scrutiny that reveals yes, they are indeed wheatears, but not the species with which I'm familiar. Because, to me, identification really doesn't matter, a jot, I will continue to enjoy the experience of looking at all creatures which cross my path uncluttered by such nonsense. 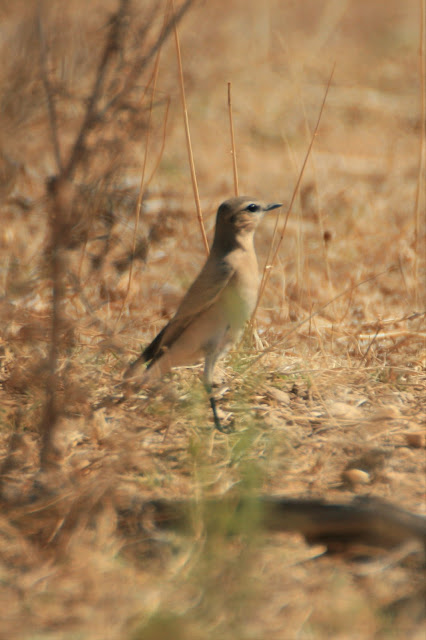 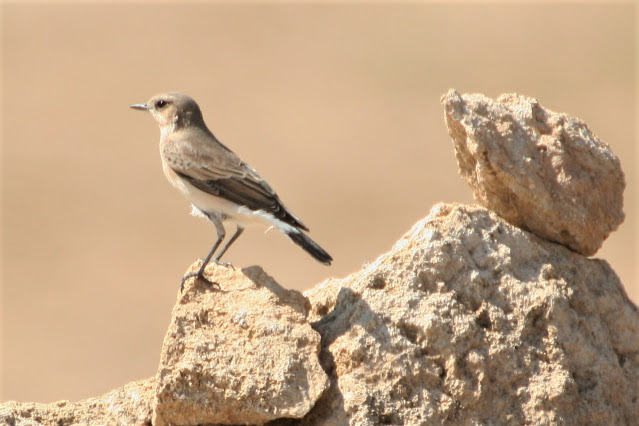 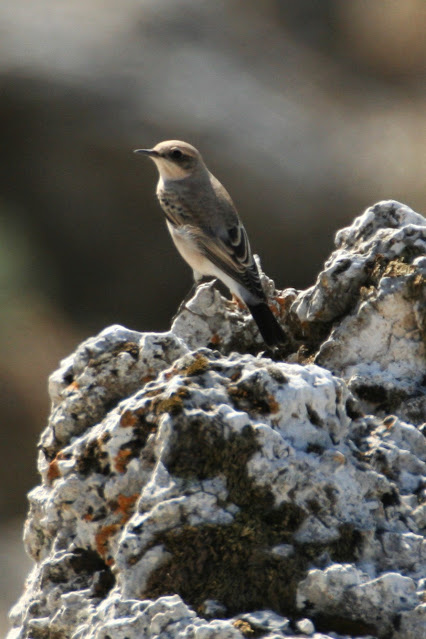 The current pan-species/bio blitzing craze is something to which I am as far alienated as is humanly possible. In the year 2020, how are Victorian collector mentalities allowed to prevail within these technologically advanced times? Those same guys who pin invertebrates to data tagged cards then pull out the most advanced camera kit to show, in intimate detail,  the subtleties of the id criteria required for a positive record to be claimed. Why the need to photograph a corpse? Stick the creature in the fridge then take those same images of a living entity before releasing back from whence it came. Can't do that because I'd have a gap in my collection! Might just as well promote egg collecting and erecting statues to celebrate The Slave Trade while they're at it! 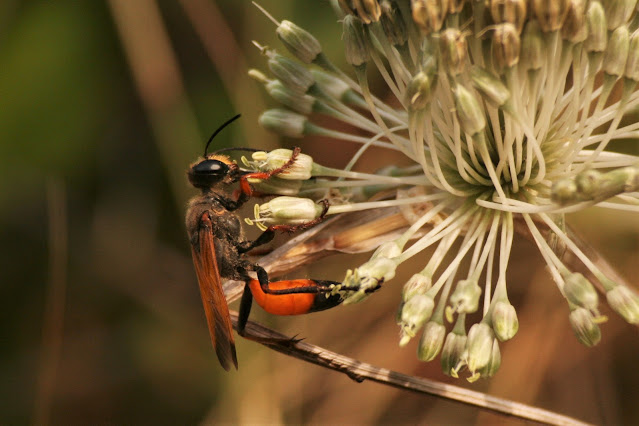 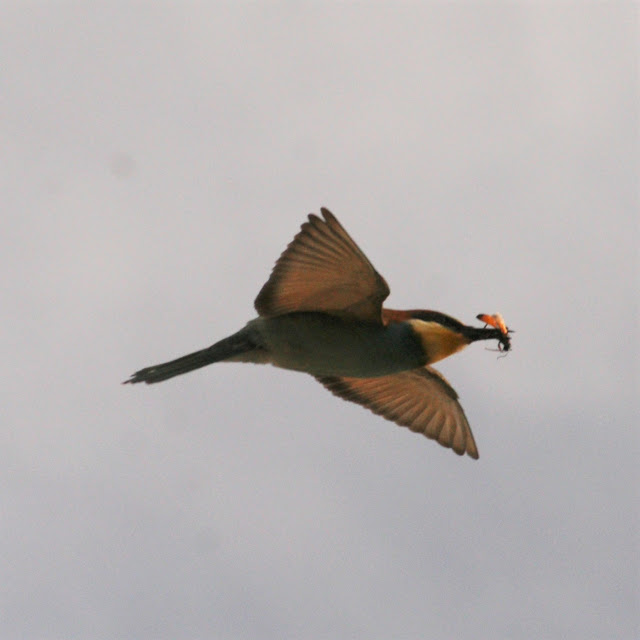 Now on to a really weird scenario. Fujifilm SIS were in contact, via the Royal Mail, to all us guys/gals, currently enjoying, oops! sorry, I mean enduring this enforced "furlough" caper. Basically it was to keep us updated and to ask if those it involved would be prepared to exchange holiday entitlement to ensure 100% wages continued to be payed as the Government support started to subside. The parting line being something about your manager getting in touch before 6th July. I'd already spoken with Bev about the fact that this might be a possibility and that "Minge" (my mate Eric, fifteen years my junior, but still thinks he's in control) was the only one at Fuji with my number. Just gone 19.00 hrs, yesterday, and "ping" goes the phone with a message from guess who? I hadn't even opened it, instead walking into the living room to show Bev this crazy message about wanting to use holiday entitlement! Wrong, it was even better than that!
I don't have the vocabulary to be as pathetic as this whinging 6' 5" excuse of a man. There's a baby seagull fallen down my chimney. "I've rung the RSPCA and they haven't replied. What should I do?" I immediately rang him back, saying that I'd drive over to his place and get it sorted, which I did. The first time I've had the chance to meet his wife, Kim, and took full opportunity of the situation by asking if she was hoping for some type of medal, verging sainthood, for putting up with the useless twat. My parting shot was "you owe me one!" Job's a good'n! Watch this space once we get back to work. 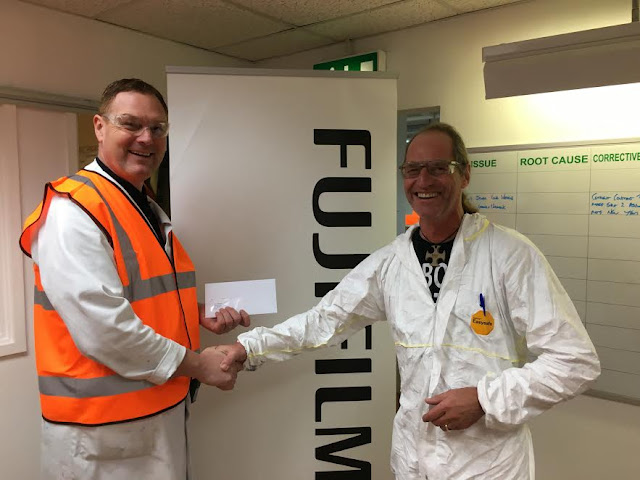 Happy days! The Minge presenting me with a factory IPICs award worth
enough money to purchase three Nash Siren R3's. No wonder he's my mate?
So now we're close to the finish of this jumble sale of a post. What the f*ck were those Burnley fans thinking when they decided to get a banner "White lives matter Burnley" towed behind a light aircraft over the Manchester City stadium? It amounts to blatant racism and incitement, nothing better. If they'd really wanted to make a statement and incur support for an alternative theme then "All lives matter" would have been the way forward, certainly more likely to win approval than this, seriously misjudged and odious, prank. What the Burnley captain, Ben Mee, had to say about this outrageous stunt is well worth watching. Click here
Posted by Dylan Wrathall at 19:22