This is a bit of a tale, and I will start at the beginning. Following my recent Top 10 - revisited post, there had been an exchange of comments, with Steve Gale, about eels and I had made mention of a desire to target a big one at some stage. Well, the weather has been ridiculously warm; I'd  had to cut the grass on Thursday, so figured that a couple of outings to the marshland drains might be worthy of effort based upon my earlier project. On Tuesday I took a wander across the marsh, my grandson Harry in tow, just to have a quick look and introduce a bit of bait (sardine & bluey sections  plus a few prawns).
I returned, next evening, tackle to hand and fished for a couple of hours after sun-set; always the most productive time when targeting eels? This theory is attributed to, the late, John Sidley and I have no reason to question/challenge the wisdom behind the statement.
My Wednesday session wasn't without incident, although no eels (fish) were landed. I did have a very lively encounter with a feisty pike which towed me around for a while before biting through the braided hook-link. It looked a decent fish, a low double being my guess as I recalled the encounter to Benno on Thursday morning.


Bev had an engagement with her parents and brother, for Friday afternoon/evening, so it was the ideal opportunity to get back out to the drain, pike tackle to the fore. My shift ended at 13.00 hrs and I was out on the drain before 14.30 hrs, three rods fishing within half an hour. It took all of five minutes for my first action, a scrappy little jack (5 or 6 lbs) giving me the run around before finally drawn over the net chord. Just over thirty minutes later, and my middle rod registers a fast take, on 1/2 Herring, which resulted in a very nice pike of 9 lbs 10 oz visiting the bank.The session moved on, and with the light fading fast, I recast the rod, knowing that I would changing the wire trace over to a braided hook link, for the eels. It was just after 17.00 hrs and already dark, the left hand rod having already been switched over to the eel rig, and I was sorting out the replacement stuff for the middle rod when it rattled off. A powerful and spirited battle, resulted in a lovely pike of 9 lbs 8 oz ending up on the bank and a session in front of the camera kit. 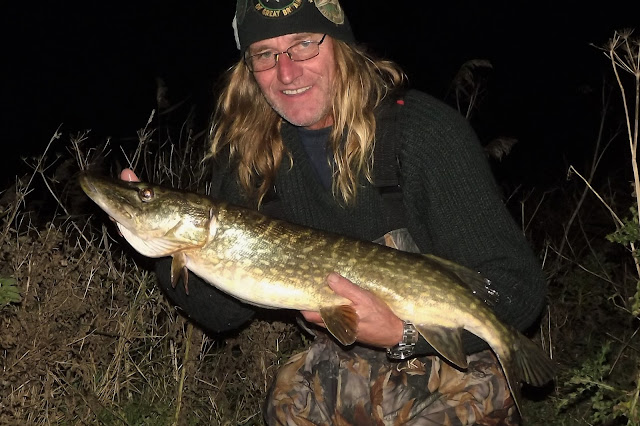 As I unhooked it, I also recovered the lost braided hook link, from Wednesday, so job's a good'n. It provides me with a great deal of comfort knowing that my tackle hasn't caused any prolonged damage or suffering to a magnificent fish. I rested the fish in my weigh sling whilst sorting out the camera kit. A quick self-take session and I slipped the fish back and changed the rig to a braided hook link and re-cast into the drain. Less than fifteen minutes later the right hand rod was away again and, after an interesting tussle, my first "double" of the season was engulfed in the mesh of my landing net. It certainly seemed that the pike in this venue are happy to feed under the cover of darkness. With the camera already set up, it was relatively easy to get a couple of record shots before returning her to the water. I fished on for a further hour and a half, my only eel activity coming to the rod which remained set up for pike. Half a mackerel being targeted by my quarry. I will be going back, that's for sure, but have other venues to explore as the days shorten.

Other wildlife has added to the enjoyment of being out on the marshes; a Great White Egret and Common Buzzard on Tuesday, a Barn Owl on Wednesday and there was a dragonfly (Migrant Hawker ?) patrolling the drain as dusk fell yesterday - so much more to my angling than catching fish!
Posted by Dylan Wrathall at 08:09