Another chance to spend an afternoon/evening session out on the marsh - so I did just that! I am really getting a feel for the place; enjoying the fact that I'm out there, as much as the fishing itself. I fished my usual three rods, but all four bites, today, came to just one; my left hand kit which was cast along, rather than across, the drain. I didn't connect with the first fish, although the teeth marks on my mackerel tail told the tale - I'd missed a decent pike, such was the space between the puncture marks. I re-cast and it wasn't fifteen minutes later than I'm in action again, this time the hooks took hold and, after a bout of tail-walking, a clean looking pike of 10 lbs 8 oz was in the bag (the same fish as responsible for the  earlier bite?). 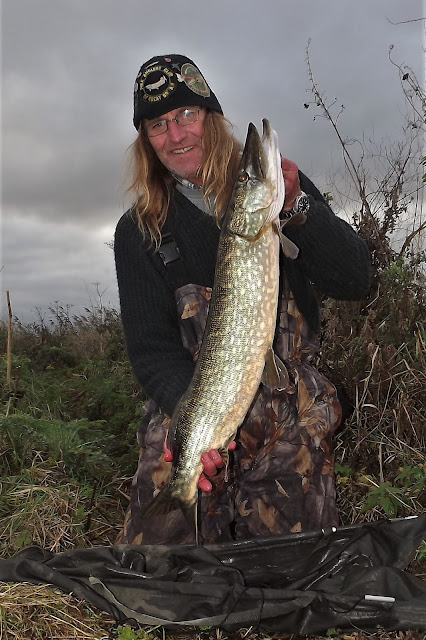 I re-cast the gear, this time baited with a sardine, dyed green, and sat back to absorb the ambiance as the light started to fade away. A Barn Owl put on a fantastic show, as it hunted the surrounding fields, although I didn't see it catch anything whilst the light remained good enough to use my bins. A fox was also watched, hunting the reeds beside a feeder ditch - it was a real joy to be there to witness such activity.
It was well dark when the alarm sounded again, this time a rather dour scrap resulted in a pike of 9 lbs 2 oz visiting the landing net. A prominent scar allowing me to confirm it as a re-capture, from just five days ago, when it weighed an ounce lighter! The only other action, on the rods, was an ambitious eel attempting to snaffle a whole sardine - the rig came back looking like a clock spring!
I spent the remainder of my session awaiting an alarm to sound, but playing with the camera kit in an attempt to record some rodent action. I believe them to be Wood Mice, but they were mob-handed and continually drawn to my bait, which was in plastic bags beside my chair. Not the food choice of a vegetarian species, as I'm led to believe? Using the light from my head torch, allowed me to get the camera focused ready for one of these creatures to appear. Still not completely confident with this set up, I am happy enough with this result.

I've got a week of earlies coming up, so another session is very likely. However, repeat captures do nothing for me, other than confirm the very low stock levels in these drains and the effectiveness of my bait presentation. One more visit then it might be time to take this experiment to another venue?
Posted by Dylan Wrathall at 21:40