A change of fortune

Out of the bungalow at 02.10 hrs, this morning, headed back to the Ash Levels for another attempt at landing a carp. The weather was everything I could have wished for and I got both my rods out before 03.30 hrs. Same old tactic of a few pouches of munga catapulted into my swim before casting my baits in the midst of the freebies. I spent a while watching a couple of Foxes hunting mice in a newly cut hay field, saw a lone Hare and a smart adult female Marsh Harrier as I awaited my bite alarms to sound. I'd recast twice before, at 06.40 hrs, my right hander was away and I found myself attached to a very spirited fish. 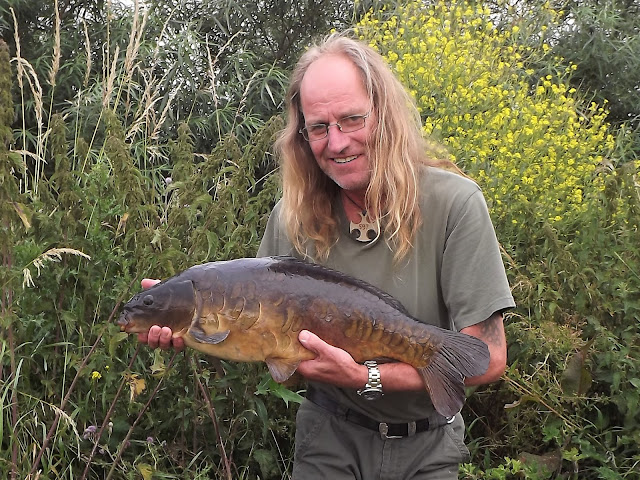 Far too much weed in the drain for a proper battle, this was really a succession of spurts between weed clumps. The fish ended up with so much weed over its' head that it went into the net first time with very little resistance. Can't say it was overjoyed about the situation when I lifted it clear of the water - it had the right hump! It was a magnificent wild plated mirror, the colour of mahogany and one of the prettiest carp I've seen. The spinning dial reducing the creature to a statistic for my list - all 12 lbs 15 oz of it. I was over the moon with the capture; a plan had worked and the fish was hard evidence of being on the right track with my methods. I will get around to doing some tank work, so as to be able to show my rigs and how I am applying them. Similarly, there will be an account of my bait choices and the thinking behind them - probably at the end of the summer. I do hope that this is the start of something good - only time will tell!

Just as an aside, my regular camera kit has started to play up. Both my EOS 350 & 400 bodies will not work with either of my 18 - 55 mm lenses. The dreaded Error 99 being displayed whenever I attempt to use them. The bodies work fine with my Canon 70 - 210 mm and Sigma 170 - 500 mm lenses, so I have had to call upon the services of a Fujifilm Finepix S3200 to do my self take fishing photos. First impressions are pretty damn good - but I would say that because I am employed by Fuji, after all!

After I'd lost that carp last Sunday evening, I had started to write a post which never got finished. The landing of the carp today has lifted a great weight from my shoulders and my thoughts are summed up in what I had in a draft post - read on.

During the last few weeks of Dad's time on Earth, we spent many hours in conversation as he prepared himself for the next stage of his journey. As Mum before, Dad was a devout Christian and held strong beliefs about the after-life. They were a comfort for both of us during this period - his passing was peaceful and dignified. "No regrets" being his oft-voiced verdict on the mark he (and Mum) had left behind. The success of St. Faith's at Ash (an independent school which my parents founded) is a permanent marker of their vision to promote educational excellence and responsible individualism as a way of preparing youngsters for the trials of adult life - I am incredibly proud of this legacy. It is nearly a year since Dad passed away and my desire to honour that promise remains central to my quest for a split cane thirty.
That outpouring of emotion following the crazy tackle malfunction, of Sunday night, is a direct consequence of my total desire to succeed. I've now had plenty of time to think through the episode; attempting to gain insight into the cause of my misfortune and review what might be worthy of future effort in order to continue with my challenge. It is I, not Dad, that set the parameters of this quest. My stubborn insistence to shy away from chasing "known" fish and frequenting "trendy" venues has imposed a set of limitations which push my boundaries beyond any "comfort zone" - I'm way out of my depth with this one!
Was that lost fish the one I so desire? No, I don't think (for a minute) that it was. It was far too feisty to be a thirty. My main issue is that my tackle under performed and I have a real problem with confidence when tackle failure can impact on the outcome come the time of reckoning. Under no circumstances can I use a 1957 Richard Walker Mk IV with a Shimano "Bait Runner" - it simply ain't happening! If the Mitchell 300's are unable to deliver a reliable performance, then my other option is to use centre-pins.
Posted by Dylan Wrathall at 11:21