We had an intensive downpour, with accompanying thunderstorms, overnight - the 125w MV stood up to the ordeal and has delivered another superb crop of moths. Two Small Mottled Willows, another Red-necked Footman and the first Oak Eggar of 2015, amongst the egg boxes, along with several other new, for the year, species. My copy of Micro Moths of Great Britain & Ireland has been ordered from Amazon and should be with me by mid-week. Poplar and Privet Hawks have also turned up in the passed few days, taking the garden year list of Sphingidae (Hawkmoths) to a very respectable seven species. I have only got Pine and Convolvulus to add, in order to make the complete set for our little Dumpton dominion. (However, Striped, Bedstraw and Spurge have been taken in garden traps within a mile of our bungalow - there is still potential for new species!) Green Silver-lines and Common Emerald were also additions for the list - green is the colour!

I'm sat indoors, listening to Duran Duran's 1982 album - Rio, what's happening to me? I'm actually enjoying it! Yesterday I watched (again) a documentary about the life, and music, of Gerry Rafferty. Earlier I had used the i-player to listen to a Radio 5 interview with Paul Gascoigne. Uncanny parallels between these two incredibly gifted individuals - they are victims of human frailty, the undeniable power of addiction over intelligence and reason. There is absolutely no doubt that both are masters of their crafts, Gerry sadly succumbed to his alcohol problem, Gazza seems to be doing his best to come to terms with his own battle - good luck guy, you've given an awful lot of kids something to dream about; that goal against Scotland; something else. So where's this latest "Wrathall waffle" going?

My final trip to Sandwich Coarse Fishery, just before the start of the season, was to be enhanced by the chance meeting with a lady, Janet, who was camping (in a Renault camper van?) and out enjoying an evening stroll with her dog, Aimee. As she approached my swim, she enquired how I was getting on? I don't understand why, or how, but we quickly established that we had many basic life rules which were shared. At some time during the conversation (it lasted a long time - 30 minutes plus) I made the statement "the World is a truly fucked up place!" Janet wasn't having this, her reply being far more reasoned. "It's not the World, it's the people in it, who are fucked up!" We spoke about the greed culture, about the healing power of natural history and the incredibly destructive influence that religious zealots are applying to modern society. It was a fantastic experience, to speak so openly with a complete stranger. I doubt if we'll ever meet again, but can honestly say that it is an encounter that has impacted upon my own outlook, in a very positive manner. Janet had a hobby manufacturing pens - which she makes from scratch. If anyone, out there, knows this lady, please let her know that I am very grateful for her input into my own slant on the world. 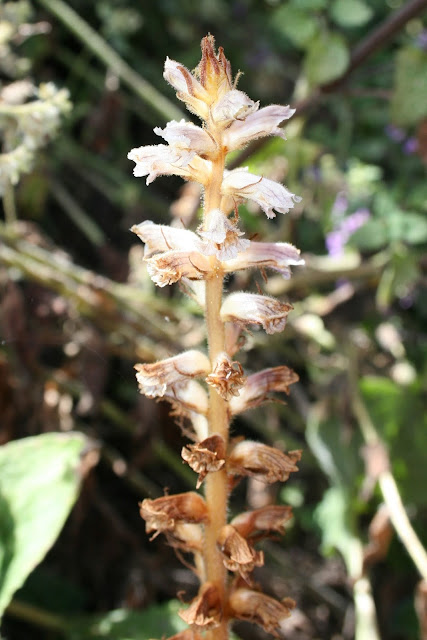 So, here I am, the Duran Duran album coming to an end. I have to make a walk across Ramsgate to meet up with Bev, at Debbie's house. There are twenty-three spikes of a Broomrape sp. (Tall Broomrape - my best guess?) growing on a small patch of rough ground. I remember back to the days of Sandwich Bay Obs and the search for Clove-scented Broomrape along the dunes beside the bay and spending time, with Bill Pegram, looking for Pasque Flowers in the Chilterns. The fact that I've even bothered to mention these plants is testament to the way my own journey has developed as others have contributed their ideas to my own thinking processes. Steve Coates and Steve Gale - I owe you a beer? (I knew that there was a link with Gerry and Gazza somewhere!)