The first part of this is a post that I'd kept in my draft folder, because it got superseded by the arrival of my Micro Moths book. It was written as a follow up to my previous effort - "Doing it right"


PART I (Wednesday 8th July 2015)
﻿
﻿
Time has come to focus my thoughts - if I am really serious about this tench challenge? I've spent quite a lot of time speaking with Benno and Simon about my ideas, they've offered a few suggestions but, if I'm honest, they're not what I'm comfortable with. Method feeders/rigs are undeniably effective, but way outside my scope and as for using plastic sweetcorn, never in my thinking . If this project is to work, then the tactics I use must be those with which I am familiar. It is very true that I've adapted my angling, since my return, to embrace much of the terminal tackle advancements that are now available. However, since I seek fulfilment before any other consideration, I will continue to pursue my targets in a manner which will deliver maximum enjoyment. Not, for me, the ruthless efficiency of a "Maddock-esque" technician, but instead, a Fred J. Taylor/Dick Walker countryman's appreciation of the finer aspects of the gentle art.
Am I kidding myself, harking back to a romantic idyll that is now long past? No, I don't think so; right from the very off, there is absolutely no way that I'm spending time (I never have) watching a red-tipped, porcupine quill dithering about above patches of frothy bubbles before it sails off beneath the oily surface of some tranquil backwater. My tench fishing background, was fired by such tales but, is based around my experiences just before and beyond the first double figure fish from Wilstone Res. Float fishing is for purists, not romantics, I will happily await the call an electronic alarm to indicate a bite - just as I did all those years ago!

﻿
As a kid, I remember my envy when I discovered that a guy had caught an eel (a couple of pounds at best!) from the Grand Union Canal, just opposite "Rose's Lime Juice" - there won't be many reading this stuff who'll have any idea where this was? It was in Hemel Hempstead, Hertfordshire, the Watford side of Two Waters  - eels were scarce, if not incredibly rare, in the waters of that county - this was back in 1970. I have never heard of a single specimen being taken from the Tring complex? In East Kent 2015, eels play a central role in all my angling, I detest the bloody things - but they are an indication of the superb water treatment standards that Southern Water PLC are delivering to the region. It doesn't matter if I'm barbel fishing the Stour or piking on the RMC - all year round, eels are a bloody pain! In order to combat these slimy pests, I've had to completely rethink my strategies. Bread/maggot cocktails or lobworms are completely out of the equation, along with halibut pellets, shredded tuna and luncheon meat. These, good for nothing, bait munching, pests have dictated my approach, yet again. It's vegetables or nothing, if I'm not to be continually bothered by slimy interlopers. Fortunately, I do have a plan - the basis for which is due to my library containing so many old books. Fred J. Taylor (Fishing for Tench - ISBN 0-09-138691-8) has steered my thought process and I might just have a key to unlock this angling puzzle? Benno is also enthused by this project and we should get out, over the weekend, for another session. I have a couple of venues that I'd like to try, out on The Ash Levels - let's wait and see how this develops.
I've already decided that centre-pins will replace the Mitchells and have made some very major changes to my "munger" which, hopefully, will further improve my chances. Our kitchen is full of the aroma of curried chick peas, and the hemp awaits similar treatment. With a little luck, I should be able to get out and bait up a couple of drains, on Friday morning? Terminal rigs, bait and hook sizes are, very much, an integral, evolutionary, process within the project. I'll happily refine each and every aspect as the learning process unfolds. My landing net choice is now my 42 inch carp net and Alan Brown handle, complete with float, not that silly 24 inch oval barbel lark and 10 ft Boss "Weight Lifter". The enjoyment is driven by the fact that I've absolutely no idea what I'm fishing for? When allied with the barbel and carp challenges, in The Stour, I am hopeful that 2015/16 season will prove to be a memorable one?


PART II (Friday 10th July 2015)
It was around 02.00 hrs that I left the bungalow and made my way into the darkness, headed for a baiting up session at a couple of venues. I got two, likely looking, spots sorted before moving on to another drain. The light was beginning to show, in the eastern sky, and there was quite a lot of fish activity in my selected swim, so I decided to have a couple of hours "dangling", as there was no point going back home - Bev wouldn't thank me for causing further interruption to her beauty sleep!
What a great decision? At 04.40 hrs I had a screaming take on my left hand rod (chick peas) and, after an epic scrap, slid my 42" net under a magnificent old warrior, of a Common Carp, which span the needle, of the Avon dial, around to 20 lbs 10 oz. The first twenty to grace my landing net since Feb 1984 - was I happy? Delirious might be a better summary of my emotional state. 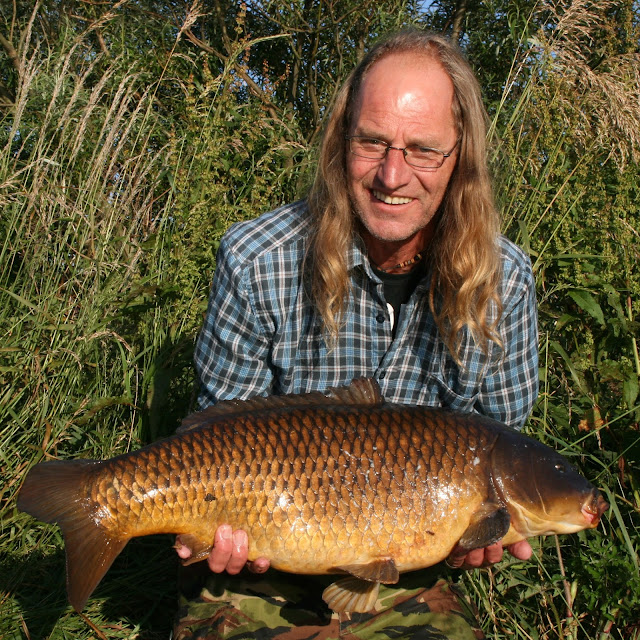 I thought about ringing Benno, but knew he had a heavy work schedule and wouldn't be able to get across to witness the fish. So I basked in the early morning sunshine - reliving every nerve tingling "twang" as the line pinged off of the numerous lily-pads that the carp visited. I scribbled copious notes in my diary and kept a regular trickle of bait going into the swim. I had already decided that 06.15 hrs was when I would pack up and attempt to get some selfie's, with the carp, when the other rod was away (06.05 hrs) This time it was a far more routine affair, as I battled with another carp which lacked the brute power of my previous capture. At 12 lbs 6 oz, it was a beautiful "fully scaled" mirror - although I initially thought it might be a tench, such was the difference in the bite and the fight!
These drains are completely un-tapped, quite what else awaits my discovery is unknown - just how I like it. Still no sign of a tench, but there wasn't really any sign of a carp - just fishy activity in the swim. It can't be too long before it all comes together.
﻿
Posted by Dylan Wrathall at 08:52