It has been a fairly hectic week in the little world in which I exist. Work has been "interesting" whilst the passing of Anne Sawyer has been in our consciousness/thoughts as Bev and I try to come to terms with her death and the funeral which is planned for Tuesday 24th June. Gadget is doing OK; but obviously he has a massive emotional roller coaster ride before anything close to normality can return to his life. His family and friends are close at hand whenever he needs  them - and you can be sure he will in the coming days.
So things like blogging, listing and chasing the barbel of the River Stour really pale into insignificance when put into a context like this. However life goes on and, despite the sadness, there have been quite a few highlights as I've meandered my way through the week. Humming-bird Hawks are being seen on a daily basis, the Red Valerian in our front garden is past its' prime yet still has enough attraction to keep a few "Hummers" interested. It won't be too long before the Buddliea of our back garden starts to flower and the real show begins.
I was outside early this morning, cleaning the car, when there was a bit of a commotion amongst the local gulls. A rather tatty adult Red Kite drifted in, very high, from the North, hung around for nearly fifteen minutes before heading back from whence it came. I had plenty of time to grab a few crappy record shots before returning to my task. The gulls never settled and I kept an eye on the sky. My reward was an immature Peregrine, with prey, which came skimming over the bungalow roof-tops before dropping down onto the field beyond our hedge. My images were taken into the sunlight and with the settings as were already programmed. Under the circumstances they ain't too shabby.
A moth that was flitting around the bedroom ceiling, yesterday night, looked interesting enough to pot up and store in the fridge until this morning. Teleiodes vulgella - nice! 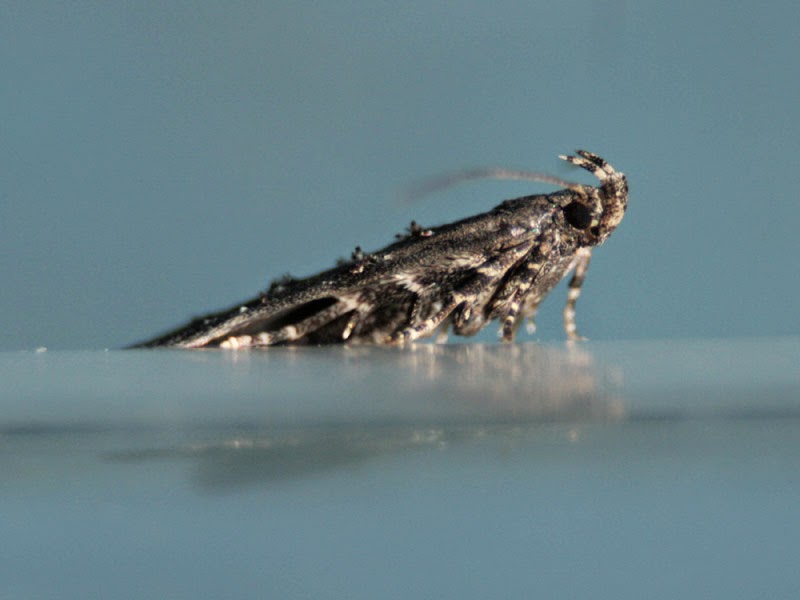