Writing for (me) fun

I've posted this essay previously (The Non-conformist Blog) but have just rediscovered it, in a long forgotten file, on my external hard-drive. It was written whilst Bev and I were on our first holiday together in the Mediterranean. We were staying on Menorca, with my family, and it was my first visit to the region. Nigel Jarman (one of the Bockhill crew) had told me that the Med was capable of "blowing me away". This piece is testament to that prophecy!
I've added a few photos, that weren't taken at the time, just for effect - I hope you like it?

Waking early﻿ - the view, from the bedroom window, was not all I had hoped. Heavy grey clouds rolled in from the sea and there was a hint of rain in the air. The first morning in new surroundings and I looked forward to exploring the area around the villa. I was on Menorca, staying at Villa St. Joan, Binnisaida, for my first ever holiday in "The Med". Friends warned the experience had the potential to impact on my mind in spectacular fashion. I dressed quickly, excitedly anticipating what awaited me beyond the garden walls?
The ravages of the Foot and Mouth epidemic had played havoc in the Kent countryside, but I was now free to roam unhindered. I unlocked the door and ventured forth into the unknown. Immediately I was struck by a bewildering display of wild flowers, their scent heavy and creating an atmosphere unlike any previously encountered. Obviously well adapted to their dry environment, many plants were thorny and brittle to the touch, yet supported flowers of breath taking colour. Sadly my botanical knowledge is minimal and I could but guess at the species involved. 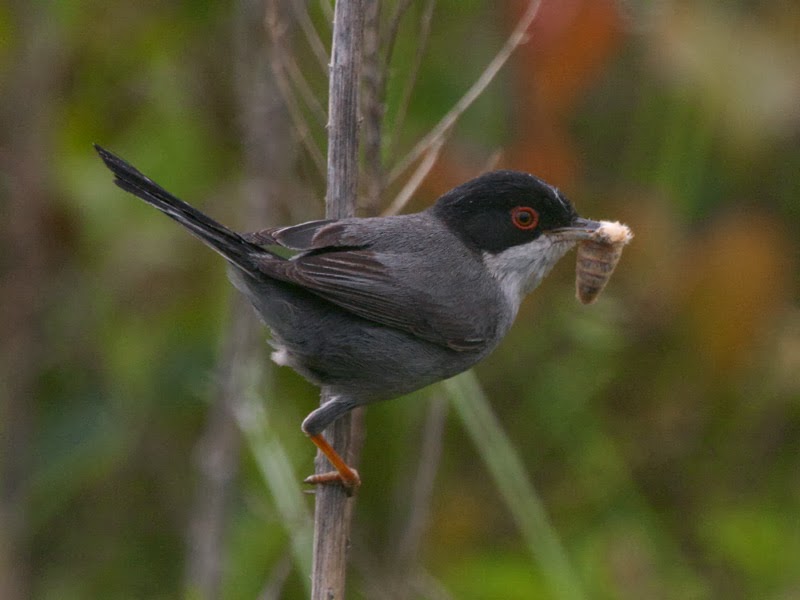 It was not plants, however, that had created the inner expectancy, but birds, those known only from the pages of field guides and magazines, yet now within my reach. I was here to enjoy every encounter to the full. Becoming aware of a distant Nightingale singing, the constant "poop, poop, poop" of Hoopoes emanated from several directions as rival males competed for territorial dominance. I walked slowly, ears straining for clarity at each snippet of unfamiliar song borne on the muggy wind. I watched a male Sardinian Warbler atop a stone wall. Beak filled with insects, it paused momentarily to offer a scolding chatter in my direction, before diving into the cover that hid a nest full of young. Nearby several other males were singing their scratchy mix of squeaks and whistles that became so much a part of the ambiance.
My list grew as other, more familiar, species were encountered along the lane that led towards the coast at Es Castell. Stonechats were common, resplendent in jet black and white livery, and so very different from the coastal migrants encountered at home during the autumn. I peered across a parched field causing two Stone Curlews to flush from the ground. As they went, uttering their wailing "curl-ee" calls, flashing white wing-bars contrasting starkly with the cryptic mix of brown and black. A heavy-bodied lark landed upon a stone wall away to my right and proceeded to sing a wonderful mixture of simple notes. Lifting my binoculars, the culprit was revealed as a Thekla. The weak sun, struggling to break through the grey skies, provided perfect viewing conditions to study plumage detail and that ludicrous crest! 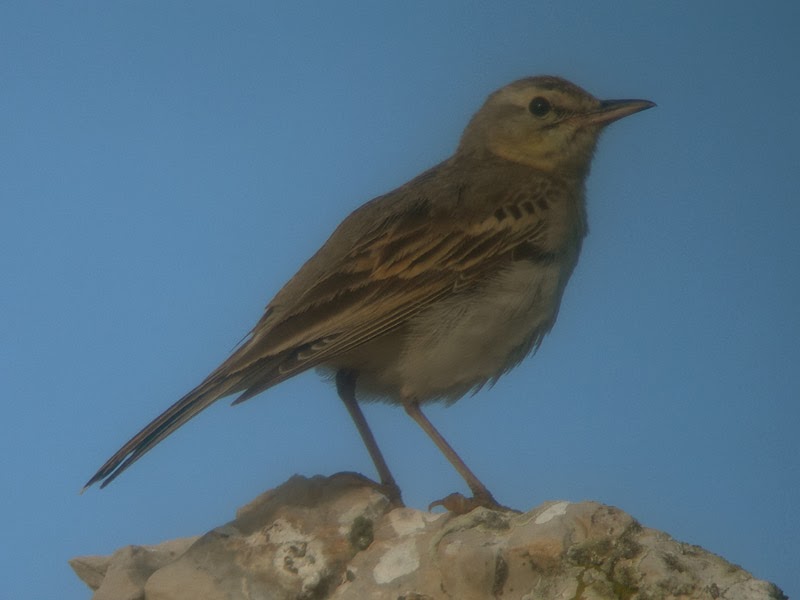 I continued onward, my binoculars being constantly raised to gaze upon a heady array of species. I got fantastic views of an adult Tawny Pipit foraging amongst some cattle in similar fashion to our Yellow Wagtails. Approaching the coastal footpath, I became aware of a singing Blue Rock Thrush, the melancholy lament drifting on the breeze. A quick scan through my "bins" showed the songster perched high on a ruined building accompanied by a Kestrel. As I watched, the Thrush launched itself into the air, then, still in full song, parachuted down on open wings before gliding to rest on a rocky outcrop. Quite a magnificent display! 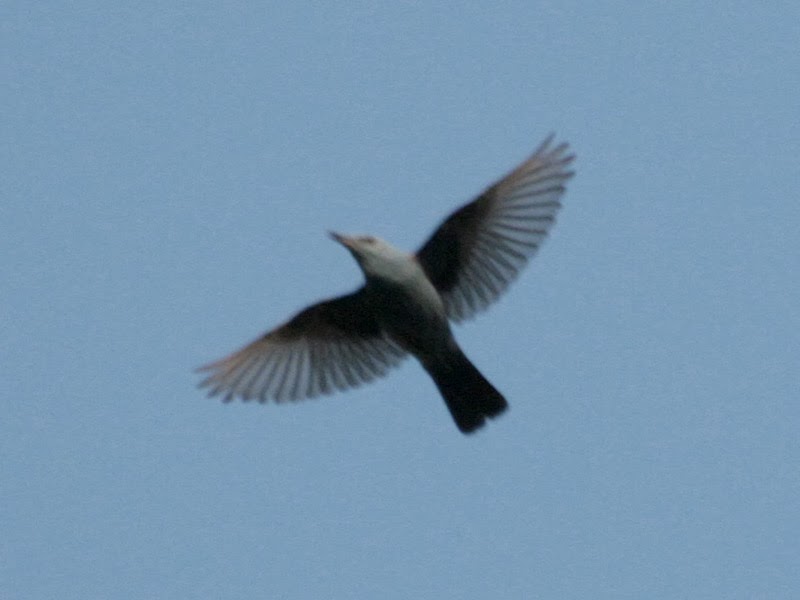 Nearer the sea, the sun seemed to be winning the battle. My jeans and shoes were saturated from traversing wet vegetation yet, somehow, it didn't matter. I could hear the distant rattle of an outboard as a small, open topped, fishing boat headed off into the morning. Stopping for a while, I watched, with some amusement, the antics of a young Mediterranean Shag attempting to catch fish just off the coastal rocks. Gulls loafing on the rooftops were identified as Western Yellow-legged. Amazed to find that I had been out for nearly two hours my thoughts turned to breakfast; time for one last scan?
Two interesting looking gulls were slightly apart from the main flock. Using my binoculars their identity was confirmed. Their backs glowing silver, like newly buffed pewter. Long grey/green legs and yellow-tipped, crimson bills, combining with sleekness Lamborghini could only dream of, produced a vision of avian perfection. Two, summer plumaged, adult Audouin's Gulls all of my own. 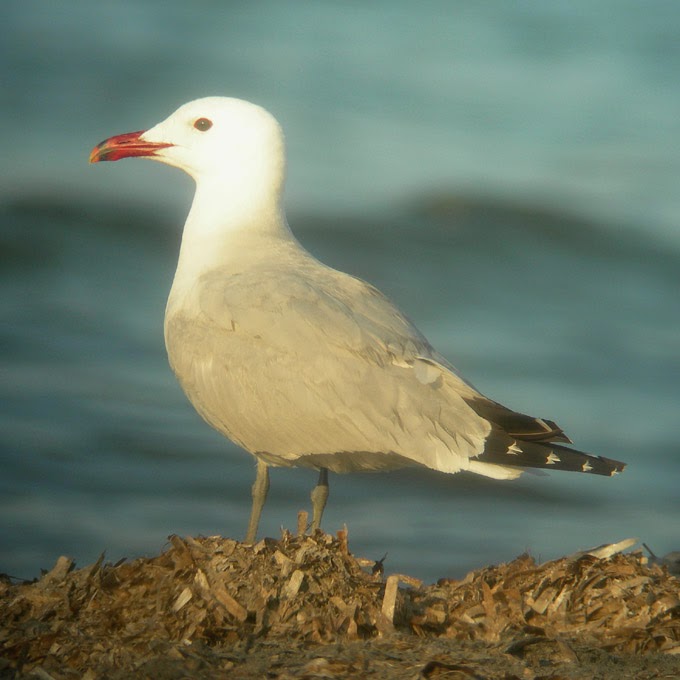 I recall standing that morning, staring in awe, transfixed by an image, of stunning intensity. Memories of childhood overwhelmed my senses. The impact of those beautiful birds recaptured an excitement, just as when first I gazed, wide-eyed, upon the fabulous creatures depicted within the pages of "Petterson's" classic field guide. On my first "Mediterranean morning", for one magical instant, I was, as predicted, completely blown away!
Posted by Dylan Wrathall at 10:04