Should have kept my gob shut? Didn't record a Swift yesterday, although have seen a single bird struggling into the NNW breeze at 09.57 hrs today. Will this be the final garden record of 2021? I did get another species for the BWKm0 list when four Yellow Wagtails went west over the garden at 08.38 hrs. I was only outside, in light drizzle, because of a Common Whitethroat giving its' signature, scolding, churring, call from the Elderberry bush in our boundary hedgerow.

The weather has been all over the shop. Dawn broke accompanied by a spectacular thunderstorm, complete with torrential rain. Arthur Burbridge and Nick Ash, the two farmers who's land makes up the majority of my Newlands Farm patch, will have very mixed feelings about this rainfall as they both have large fields of Wheat to be harvested, yet the recently planted Cauliflowers certainly needed a soaking.

Last night I was sat in my study, door ajar, awaiting the arrival of hedgehogs to the feeding station but also had the bat detector switched on hoping to record a pipistrelle sp. flying around the garden hedge. No joy but, whilst sat at my laptop, I noticed the increasing light levels due to the moon appearing from behind a thick layer of cloud. I grabbed the 600mm lens and, with a tri-pod mounted set-up, pointed the kit towards this "Sturgeon Moon"! Where does that come from? I looked it up only to find that it is derived from the peak period of the Great Lakes sturgeon season, so absolutely nothing to do with UK nomenclature? 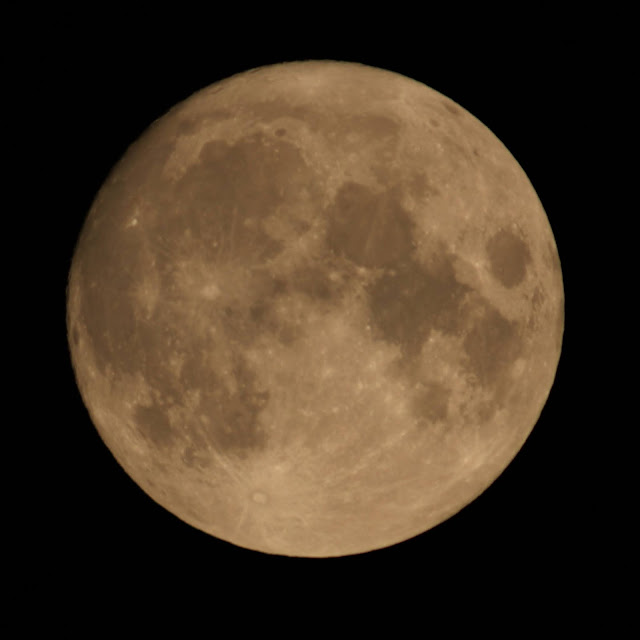 The images I captured aren't too shabby, but surely there is a name for this August moon which is derived from UK folk law rather than the US equivalent? The next two full moons are known as the Harvest Moon (September) and the Hunter's Moon (October), both of which I am familiar with. Bloody "Sturgeon" they aren't even native to the UK!