It's been a very weird week for me. Politics and opinions are just like death and taxes, you simply can't avoid them. Can't ignore them either if you have been blessed with a brain between your ears and heart within your chest? The pantomime that has been Westminster, this past week, would be hilarious if it weren't so important. A vote of no confidence in Mrs May? I feel sure that the nation would have a vote of no confidence in any of them, at present.
Work remains hectic, despite the scare mongering of the "remoaners", and doesn't appear to be suffering because of uncertainty due to the "Brexit" situation. I managed just one session during the week, a short afternoon sortie to a local drain. One that I had always felt sure would produce a pike, or two, yet hadn't cast a bait until then. It proved to be a good decision, four bites in little over two and a half hours. However, nothing was going to be that easy! The first bite came within 45 minutes and resulted in a clean break, I didn't feel a thing. "What the f*ck?". Two more takes, in the next twenty minutes saw me missing a take, then bumping a very small jack. It seemed as though I was destined for a blank. It was already well after 17.00 hrs when the alarm sounded again and, this time, I found myself attached to a very spirited pike which enjoyed tail-walking along the drain at any opportunity. When I eventually got it in the net, I was delighted to discover my earlier lost trace protruding from its' stomach. Thanks to unhooking techniques, taught me by The Pike Anglers Club of GB, I managed to remove both sets of hooks without any drama and allowed the fish to recover in a retention sling whilst I set about getting the scales and camera stuff sorted. It was dark and the drizzle was in the air, soaking everything it touched, so I didn't have much time to get my photos. I managed just one before the red battery light came on and I lost power. I quickly weighed her - 11 lbs 8 oz, nice! If she'd have been bigger I would have gone through the ritual of changing batteries/cameras, but I'd got my trophy shot and that was enough. Back into the drain she went and I headed homeward well pleased with my result. 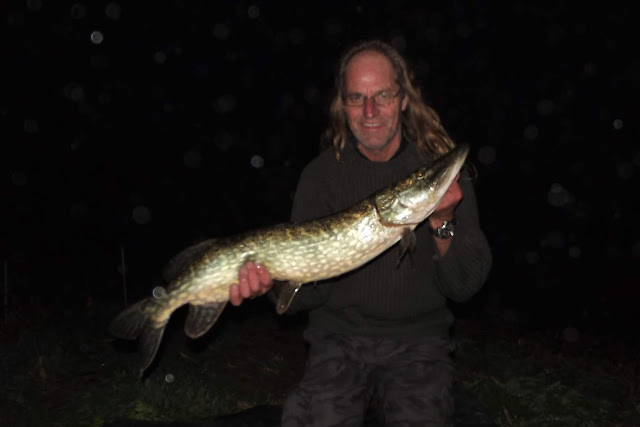 I don't know what the camera setting was, but auto it wasn't! My only picture is OK, but no better than that. I think it shows enough to allow an appreciation of the superb condition of this wild fish. No beavers seen, although plenty of signs, I had to content myself with a few Cetti's Warblers, a Water Pipit and a Green Sandpiper for filling a few column inches in the notebook. Most enjoyable, I will be back, soon!